Kirby Heyborne and His Awesome Job 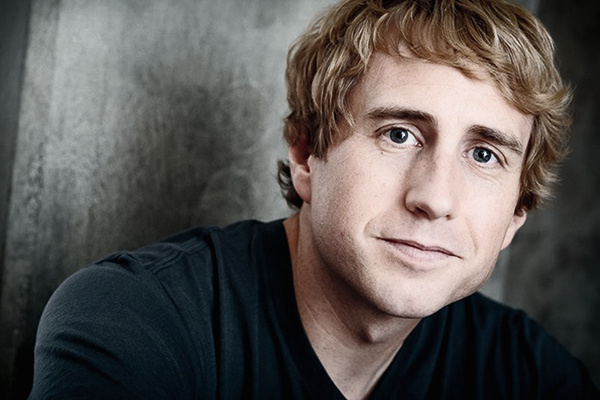 “You read and you get paid?” is what many people ask Kirby Heyborne incredulously.

You probably remember him from The Singles Ward (2002), The Best Two Years (2004), The R.M. (2003), and Saints and Soldiers (2003). If you don’t, then go watch one of those movies and look for the funny, naive blond one from the first three listed or the one with the British accent in the fourth one. 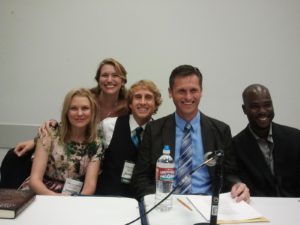 Kirby at the 2012 Odyssey Awards

Kirby has been in many national commercials for AT&T, La Quinta, Target, Best Buy, Jack In the Box, Wendy’s, Honda, Volkswagen, Liberty Mutual, Verizon and CarMax, to name a few. He’s also produced five folk-pop albums and entertains as a comedian (being co-founder and director of the Los Angeles-based improv group The Society). What you probably didn’t know until now is that he’s also the voice you hear on audiobooks for the“Fire and Steel” series by Gerald Lund and “Fablehaven” books by Brandon Mull, along with “Black Swan Green,” “Nick and Nora’s Infinite Playlist,” “Breathers” and “The Genius.”

He’s won several Audio File Magazine’s Earphone awards for excellence in narration, with several nominations for the prestigious Audie Award. The American Library Association for young adult audiobooks recently gave Heyborne The Odyssey Award, its highest honor. Publishers Weekly commended him for his performance on “Black Swan Green,” saying that “Heyborne’s performance is both compelling and compassionate, and the audio is entertaining and highly rewarding.” What a compliment.

He wouldn’t be happier doing anything else than pursuing his acting career, and that’s what reading for audio recordings does for him.