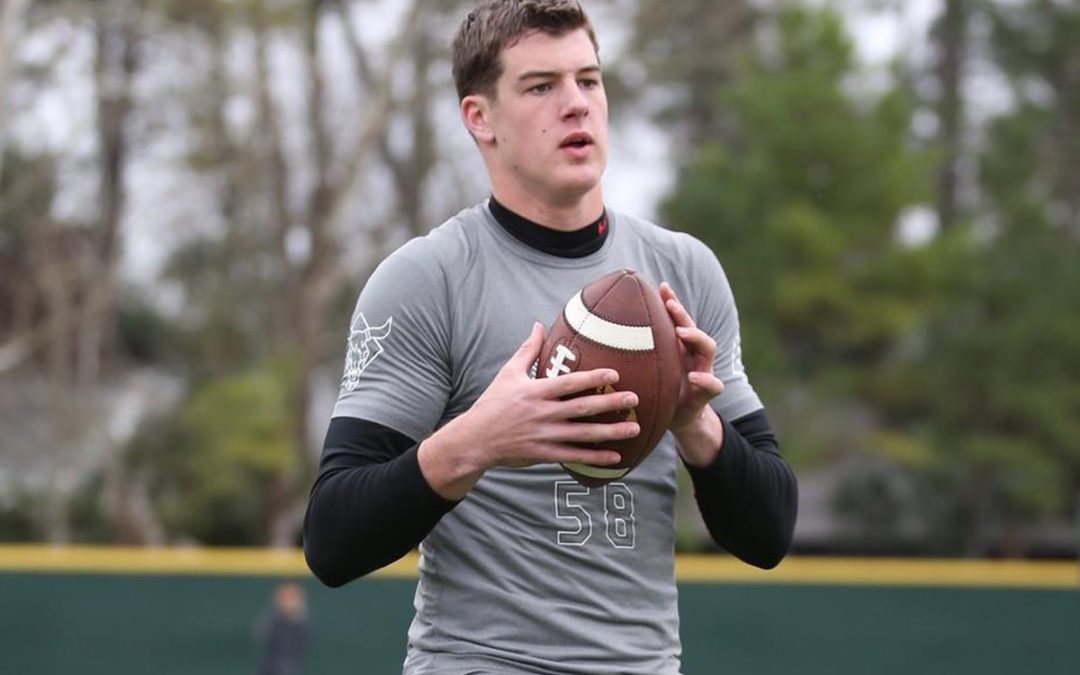 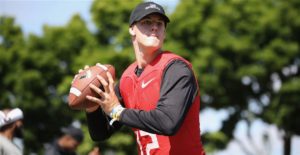 Tanner McKee, a Division I athlete and an elite college quarterback signee, grew up in Corona, California, and is the second of four children. He played baseball, basketball, volleyball, and football. He also grew up listening to the stories about his dad’s missionary experiences in New Zealand. He always knew since he was eight years old that he wanted to serve a mission, and by age 9, he had a strong impression that one day he would be called to serve in Brazil.

After high school, he decided to take a two-year break. Despite receiving offers from renowned colleges like Alabama, Texas A&M, Texas, and more, Tanner decided that serving a two-year full-time mission for The Church of Jesus Christ of Latter-day Saints (often referred to as “the Mormon Church”) was more important. He  is currently 6,000 miles from home serving his mission in the Brazil Curitiba South Mission, teaching the gospel, walking 12-15 miles every day through the streets of Paranaguá, Brazil, a coastal town of about 150,000 inhabitants located 56 miles east of Curitiba and one of the largest ports in Brazil. 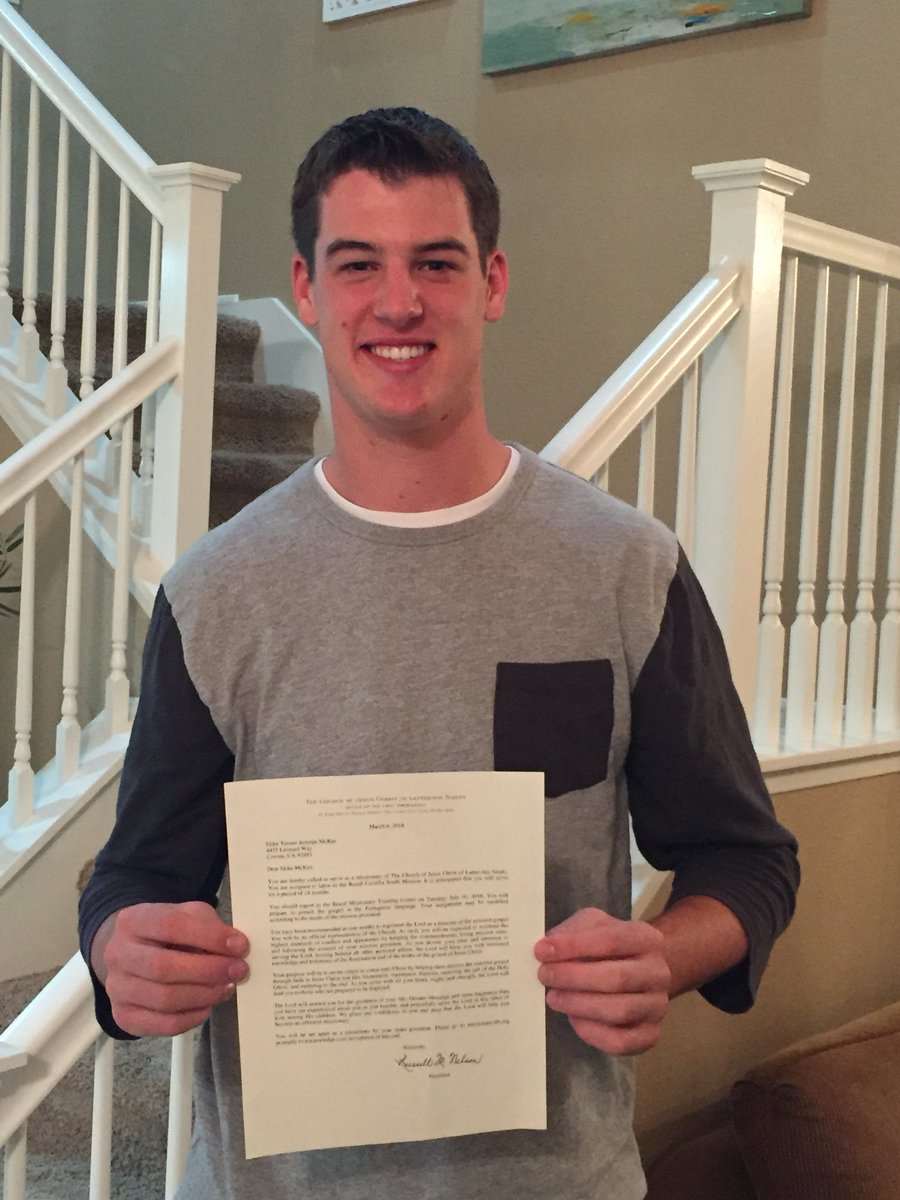 Tanner, who turned 19 in April, does his best to keep in shape as a missionary while holding on to his aspirations of playing quarterback at Stanford. He signed a national letter of intent with the school in 2018, however, there is no guarantee of football success when he returns home in 2020.

Nevertheless, he chooses to serve. For him, this is a leap of deeply felt faith. He said, “I’m 100 percent missionary. I’m not too worried about how I’m going to come back as an athlete.” He sees the sacrifice that he is making now as a way to express gratitude to God for all he has received in his life. He also said, “Heavenly Father’s going to bless me for serving a mission. My dad always says, ‘When you take care of Heavenly Father’s business, He will take care of yours.’ I’ll just do my part now and I’ll do my part when I get back.”

In early January, Tanner learned that his friend Trevor Lawrence, a true freshman quarterback whom he met at the Elite 11 quarterback competition, led Clemson to the national championship by knocking off Alabama. Tanner garnered great attention at the Elite 11, not only for his strong performance but also because he lived his beliefs and declined to participate on Sundays. Speaking about his friend Trevor, he said, “I was just competing with Trevor not long ago. It’s cool he was able to do that. We’re just taking different paths. I’m in Brazil, serving a mission. And he’s winning national championships.”

Tanner had scholarship offers from more than 30 schools, including Brigham Young University and many of the most prominent Power Five programs in college football. He even made official visits along with his family to Texas, Texas A&M, Alabama, Washington, and Stanford. On the trips he frequently discussed his decision to serve a mission with his parents.

On his official recruiting visit to Alabama, he had breakfast at coach Nick Saban’s house and rode on his boat. Tanner’s father, Jeremie Mckee, said, “Nick Saban called and offered him. He knew Tanner was going on a mission. When we met in Nick Saban’s office, he said he was totally fine with it. He said he didn’t know a lot about missions, but that he would do a lot of research and help educate himself. He said, ‘We have no problem waiting for you.’”

During his recruiting visit at Stanford, he met and chatted with former Secretary of State Condoleezza Rice. None of the schools attempted to talk him out of serving a mission, albeit one Southern Conference school would call periodically to see if he had changed his mind. 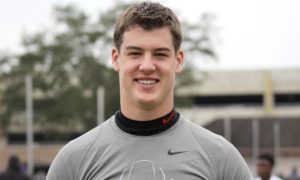 On a recruiting visit to Austin, Texas coach Tom Herman, said, “Tanner, you’ve made Texas history. To my knowledge, you’re the first kid we knew was going on a mission that we’ve offered in more than 100 years.”

As a two-year starter at Centennial High School in Corona, one of the top programs in California, McKee led the Huskies to a 21-4 record. Throughout Tanner’s high school career and the recruiting process, Centennial High head coach, Matt Logan, was impressed with Tanner’s demeanor and devotion. He said, “I thought it was awesome that he has that type of commitment to his faith. Tanner is a great athlete and a tremendous human being. As a coach, you wish you had 100 of those types of guys every year. He’s left a lasting impact at Centennial on the way to lead and the level of commitment he’s shown to the game and his faith. It’s pretty rare these days, especially with a player of his caliber in terms of recruiting rankings.” 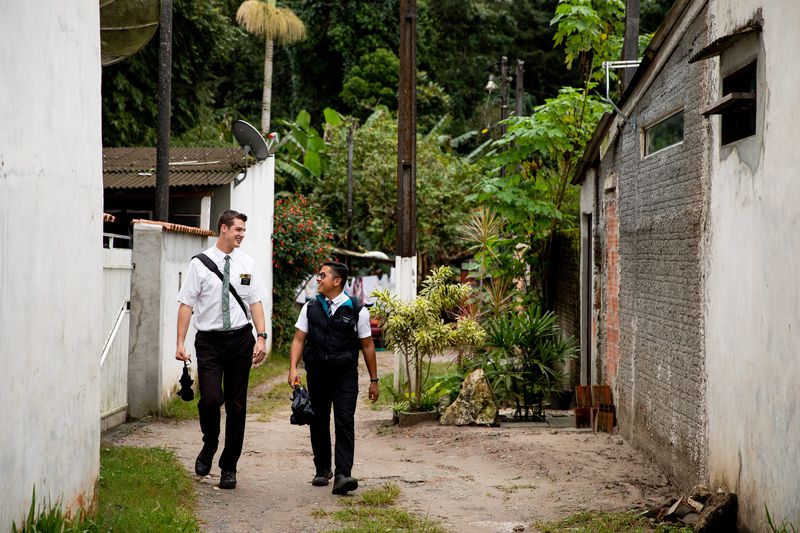 David Shaw, the current coach at Stanford, is looking forward to McKee’s return and his potential. during Pac-12 Media Day in July, he said, “He’s such a great fit for us and our community. (The McKees have) seen the progression that our mission kids have had on our team. They’ve been influencers, they’ve been team captains. I challenge them when they come back. I say, ‘You went on a mission for a reason. I want you to bring back this real world perspective to our football team.’ And not to just be another guy but a leader on this football team. The guys we’ve had have truly embraced that … I believe Tanner is going to have that kind of influence on our team as well.”

Before Tanner left for Brazil, he explained why he decided to serve a mission. He said, “I want to help everyone understand you can go on a mission and still be successful in your sport. So many people think I am crazy for going. I want to show them you don’t have to choose between faith and football. You can do both. I believe I will be a better football player when I return.”

Tanner adds, “Serving a mission will help me improve my game at a higher level for sure. I’ll come back more of a man. I’ll have passed through more experiences in life so I can get to know my teammates better and how to work with people. One of the most important roles as a quarterback is to help everyone reach their full potential. As a missionary, I’m trying to help the people that we’re teaching to reach their full potential.”