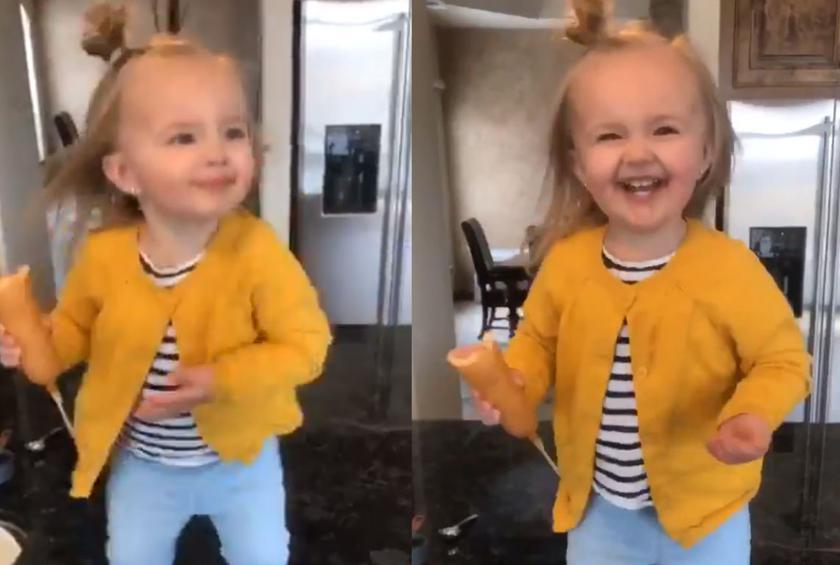 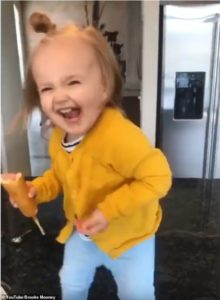 Latter-day Saint toddler, Baylor Mooney from Reno, Nevada, who is almost two years old, is taking over the internet by storm and winning hearts all across the nation with her inventive dance moves and carefree cheer. She has already captured headlines across the globe on major news networks like CNN, Time, Fox, MSN, POPSUGAR, and DailyMail. Time proclaims that Baylor’s viral dance to “Crazy in Love” by Beyonce, which has been shared over 11 million times, is “pure joy.”

Baylor’s entertaining impromptu dance moves are nothing new in the Mooney household. Brooke Mooney, Baylor’s mother, told LDS Living, “We do a lot of kitchen dancing during meal times in our home.” She continued, “Baylor’s older brother, Krew, is also known to have some ingenious dance moves along with hilarious one-liners.” 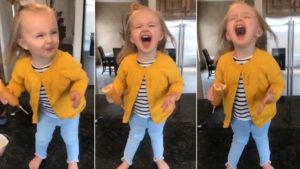 Brooke also provided more insight into Baylor’s viral dance. She said, “During lunchtime on the day I captured the video, our nearly two-year-old daughter, Baylor, requested “Crazy in Love” by Beyoncé. . . . She then requested that I go find a fan for her hair to blow in the wind. I did as she requested. She was dancing on the countertop in front of the fan while taking bites of her corn dog in between her dance moves when I knew I had to get this on video.”

She later posted the video to Facebook to share with family and friends. It immediately garnered massive attention with such positive comments like “She’s exactly what the world needed at this time” or “This makes me so happy. She’s adorable and truly makes you remember to just live in the moment, love life, and, of course, enjoy corn dogs.”

All the national and global exposure has been crazy, to say the least. We never expected any of it. But it has been fun seeing how everyone just loves her. . . .I feel like our daughter’s video has created such a viral response because it simply brings people joy and puts a smile on their face. You can’t help but smile while watching it. . . . We’re grateful for the opportunity we’ve had to spread a little light and joy, through our daughter, to the world. . . .In a world where it’s so easy to find negativity, chaos, and contention, my husband [Dylan] and I, through our faith in Jesus Christ, try to teach our children to be a light in the world.