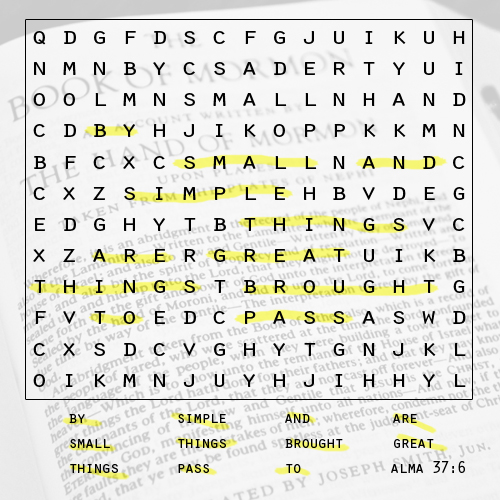 For someone who doesn’t like word search puzzles and is a bad speller, creating the Guinness World Record for the largest word search puzzle seemed unlikely for Mel Crow.  However, determined to do just that, graphic designer Crow set out and over 10 years of progress accomplished that feat.  Mel Crow received the Guinness World Records Certificate for the largest published word puzzle on January 18, 2013.

I wasn’t very good at [word search puzzles]. They hurt my brain. Then one day I wondered how difficult a puzzle would be if it was so big you couldn’t look at the whole thing at the same time.

As a graphic artist, this is something I thought I could pull off. I knew it would take me a long time, and I wasn’t in a hurry. Every couple days I would sit down and add a couple dozen words. Then add another section, then another. The excitement of breaking a world record, of doing something nobody else in the world had done before, motivated me, and I just kept at it.[1]

Mel’s niece inspired him to break a Guinness World Record through her fascination with Guinness feats.

Every time I went over there, she’d show them to me. I thought, ‘I’d be the coolest uncle in the world if I could break a world record! And since I can’t do what Michael Phelps does, maybe I could do this.’ So I started putting it together, and it got bigger and bigger and bigger; it was just a really big project. [2]

Mel officially began creating his word search in 2003. Organizing the puzzle came easily, but the tedious parts of finding and inserting words caused Mel to put the puzzle away for several months at a time.

Just the process of finding different words was a learning experience for Crow.

“I’m not a very good speller, so I had to make sure some of these big words were spelled right. Plus I had to do some research,” Crow said. “I learned all kinds of neat stuff.” [2]

As a member of The Church of Jesus Christ of Latter-day Saints (often inadvertently called the Mormon Church), Crow added scriptural words and names from the Bible and the Book of Mormon (an ancient record of Jesus Christ’s people on the American continent.)

Crow’s mother and wife encouraged him as he worked on his record breaking project. His mother Nellie said, “It was like when he was young and he went on a walk-a-thon. I told him that I didn’t care if he came in last as long as he finished. I felt the same way with this word search.” [3]

Six years after beginning his project and after they were already married, Mel Crow introduced his wife Malinda to the word search.

The result of his efforts is 10 feet wide and 15.5 feet long and contains 5,500 words, hidden amongst 51,000 letters in 204 columns and 250 rows. Crow also included 200 secret words, including family members’ names, in the puzzle.  He is convinced that no one will be able to find all of the words and finish the puzzle.

“I know someone will break this world record, but at least I can go to my grave saying that I’ve accomplished something,” Mel said. “The world is a really big place. There are a lot of people in the world, and to think I’ve done something that no one in the world has done, that’s pretty cool.” [3]