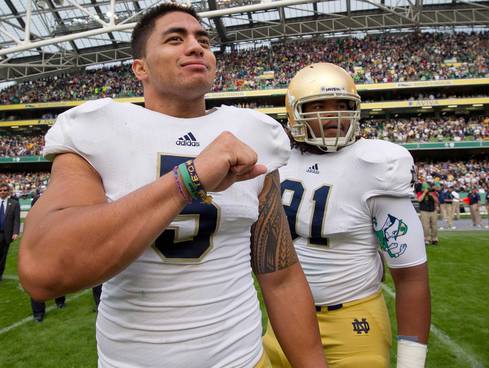 Manti Malietau Louis Te’o,  a member of The Church of Jesus Christ of Latter-day Saints, is an American collegiate football player of Samoan descent. Growing up on the island of Oahu, he was one of the most decorated high school athletes in Hawaii’s history. His name has become one that many people have become familiar with, not only because he is an exceptional football player, but also because of the manner in which he conducts himself and the example that he sets, both on and off the football field. He probably could have chosen a number of schools to play for, but he strongly believes that was directed by the Holy Spirit as an answer to prayer to play for the Fighting Irish at Notre Dame. Since becoming a member of the team, he has not only gained favorable recognition for his outstanding sports abilities, but he has also gained the respect of his teammates as an inspirational leader.

As Te’o comes to the golden end of his Irish career he has become known as “a Mormon among Catholics; a Samoan among Hoosiers; a linebacker among Heisman Trophy finalists.” [1] He could have entered the NFL draft a year ago but chose to stay with the team at Notre Dame and finish out his college experience there.

Last month, accompanied by his parents, Brian and Ottilia Te’o, he made the trip to the Heisman Trophy ceremony which was held at the Best Buy Theater in New York City. This is how he described that trip:

Prior to the ceremony Te’o commented concerning the idea of possibly winning the Heisman Trophy:

“I really don’t know,” Te’o said. “When I won the Bednarik (Award), I was lost for words. Then I found out I won the Maxwell (Award), and I was like, I could never even imagine this happening.

“I can only imagine how I would feel if my name was called to win the Heisman. I definitely would be humbled and speechless. It would be a great ending to this section of my career at Notre Dame.” [3]

Te’o did not win the Heisman Trophy that evening. He finished second, loosing to Texas A&M red-shirt freshman quarterback Johnny Manziel. He finished with 321 first-place votes and 1,706 points – the most ever by a defensive player in college football history. He may not have won the Heisman that evening, but he still earned a place in the football history books as he became the third defense-only player to finish in the top two of the Heisman Trophy balloting and the first since Pittsburgh defensive end Hugh Green in 1980. Iowa defensive tackle Alex Karras was the runner-up in 1957. [2] Including Notre Dame’s seven previous winners, Te’o (Laie, Hawai’i/Punahou H.S.) is the 17th Irish player to finish in the top three (11th in the top two). It’s the highest a Notre Dame player has finished since 1990 when flankerRaghib Ismail was runner-up to BYU quarterback Ty Detmer. Te’o is Notre Dame’s first Heisman Trophy finalist since quarterback Brady Quinn in 2006. Quinn finished third in that year’s balloting. [2]

Te’o also adds to his list of credits the fact that he has captured the Nagurski Trophy, Butkus Award, Lombardi Award, Bednarik Award, Maxwell Award and Walter Camp Player of the Year all in one season. No other player in college football history has ever captured more than five major awards in one season. Te’o is the first player in college football history to sweep the aforementioned six awards. He nearly became the third player to ever be named a first team Academic All-American and win the Heisman in the same year joining Pete Dawkins (Army) in 1958 and Danny Wuerffel (Florida) in 1996. [2]

Speaking about the winner of the Heisman Trophy, Johnny Manziel, Te’o remarked:

“He’s a real cool guy, loves to chill and have fun and be with his family, doesn’t like the spotlight too much,” Te’o said of Manziel. “He’s just like me. We love the game. We love what it can do for our family. We don’t really like the spotlight, but we understand it comes with the territory and we’re going to do all we can to have an impact on people that are watching.” [3]

Manti Te’o and his teammates, the undefeated Fighting Irish (12-0), will take on Alabama (12-1) in the Discover BCS National Championship Game on Jan. 7 in Miami.