One Voice Children’s Choir Releases “When You Believe” Music Video

One Voice Children’s Choir, under the direction of Masa Fukuda, filmed their latest music video for “When You Believe” on Omaha beach in Normandy, France. The song and video is dedicated to all those who fought in World War II, as well as the victims of the Holocaust.

“When You Believe” is beautifully performed in English, Hebrew and French. The song, originally from the Prince of Egypt soundtrack, takes on new meaning and depth when performed by the talented children’s choir on such a historically profound site. The children are dressed in matching dresses or suits, and their voices are perfectly suited for the song. 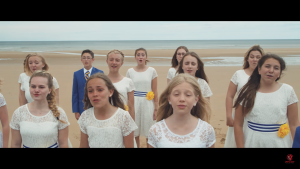 Fukada’s arrangement of the song is epic and moving. The soloists are perfectly chosen and the accompaniment only adds to the beauty of the lyrics and the message that the group is sending. It is a moving tribute to those who fought in the war and those who lost their lives as a result.

In the description for the video the choir shared a poem by  Alice Fernandez, a French national, that was read at the 73rd D-Day Commemoration Ceremony at Brittany Cemetery.

“Dear Veteran,
Today, I am representing thousands of children speaking to you
and to thousands of other veterans, and we want to say
thank-you!

Like us, you were once young and carefree, but when you were
still young men and women, liberty called to you, saying,—
I am dying, Come and save me!

And so you arose, full of courage and zeal, to answer that call.
You underwent training, day after day, for ‘D’ Day,
and when that day finally arrived in June 1944, you came by air and sea.

And you fought with the heart and soul of a free man, so that
we too might be free.

You saw your fellow soldiers fall on our beaches and in our
fields, and in spite of your grief and injuries, you stayed on,
saving others and fighting side-by-side with us.

And so, dear veteran, I want to tell you, and those dear to you,
who sacrificed their youth for our freedom and are now resting
in peace, that we are here because of you and thus are your
children,

And to you, dear veteran, who offered us your bravery and the
most promising years of your life, your sacrifice has not been in
vain. We are your living sons and daughters of liberty and are
here today to offer to you our most heartfelt ‘merci.'”

Fernandez and her family are direct descendants and beneficiaries of the sacrifices made by the Allied Forces during the liberation of Europe.