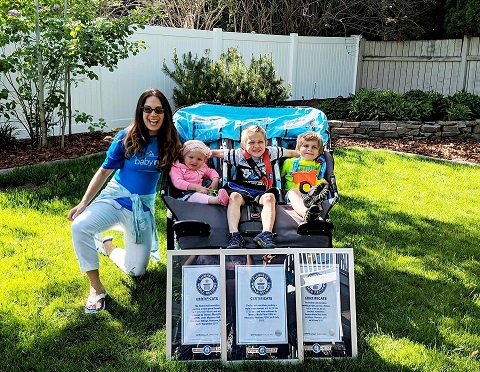 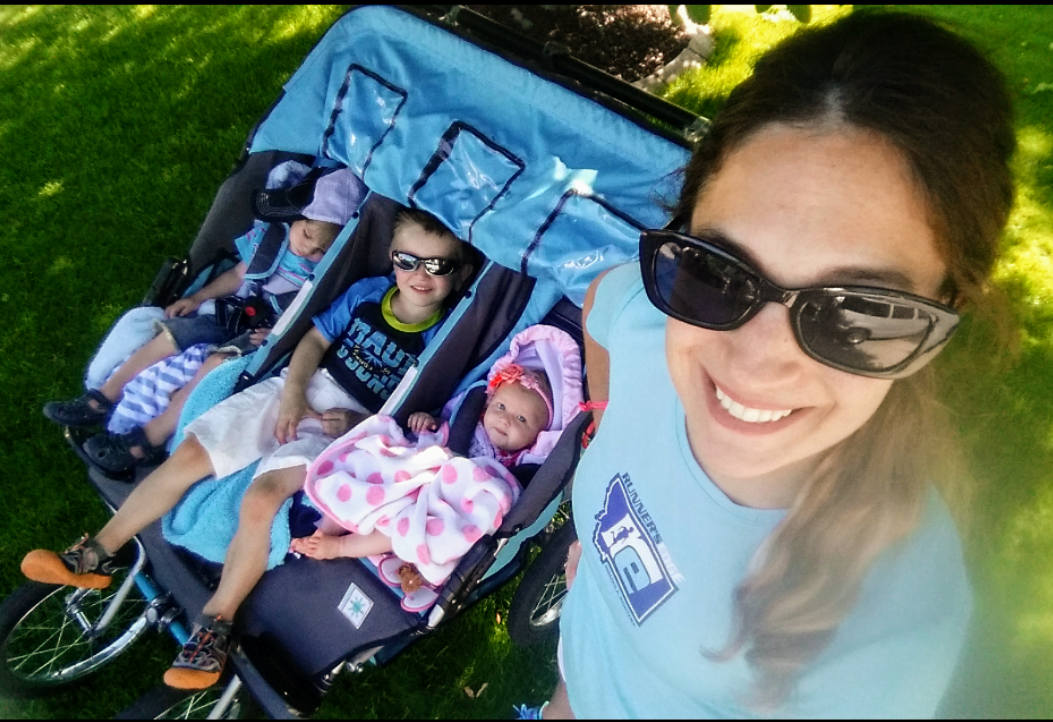 Theresa Marie Hunter Pitts from Kalispell, Montana, has been dubbed such titles as “the Super Mom,” or “the Flying Mom,” or as “the fastest mom in the world” and rightfully so. On 9 July 2017, in Missoula, Montana, running her first Marathon, she and her little team: Evan (4 years old), Anders (2 years old), and Avrielle (Avi, 5 months old), set the Guinness World Record for running the “fastest marathon pushing a triple stroller,” the first to ever brave such an adventurous attempt! She crossed the finish line with an amazing time of 4:25:37. The news quickly spread, not just across our nation, but internationally as well.

Reflecting on the experience, she says, “These achievements haven’t been without faith and without a good fight, but they’ve been worth every swing of the sword. . . .I want to express my gratitude to God for his grace and providing opportunities for me to inspire others and use the gifts he has given me in such positive ways; and to my family, friends, and the community for their incredible support and for cheering me and my little team on throughout this journey, because I couldn’t have done it without them!”

Theresa is a full-time mother and homemaker. She is married to Ryan Pitts and works in Emergency Medicine. She is the mother of eight children whose ages range from 18 years to 18 months old. She and Ryan are anxiously awaiting the arrival of child #9, the newest little teammate and future stroller running buddy, due in February 2019.

So, the question begs an answer, “With such an already seemingly busy life, why did she develop a passion for running?” She explains:

I’ve always been an outdoorsy person, but I didn’t really discover my passion for running until 2013 after my sixth child was born and was looking for a way to stay both physically and mentally healthy and well-balanced. With our busy household, I found that the only way I could get out on regular runs was if I brought my children along with me, so that’s what I did! I soon realized how much my littles enjoyed going on our nature runs, I loved their company, and I fell in love with stroller running. What had started out as a necessity became my preferred way to train. My children and I chat and laugh and sing, we often stop at the park during our runs, and just have the greatest time together!

Theresa believes that the only thing that makes a good run better is being able to bring her children along with her. She says, “There’s nothing in the world that brings more joy to my heart than being a mother. . . .I train with my children, they’ve been with me over the rocky paths and the smooth; during the up hills and down hills, so when I decided that I wanted to take on the marathon challenge I asked myself, ‘How could I leave them out at the culmination of my efforts? I want them there with me when I cross the finish line too. . .. To be able to combine these two passions of mine is such a blessing.”

She had been running with her youngest two boys for quite some time using a double stroller, and when their newest little sister was born they naturally wanted her to come along, so they upgraded to a triple stroller. 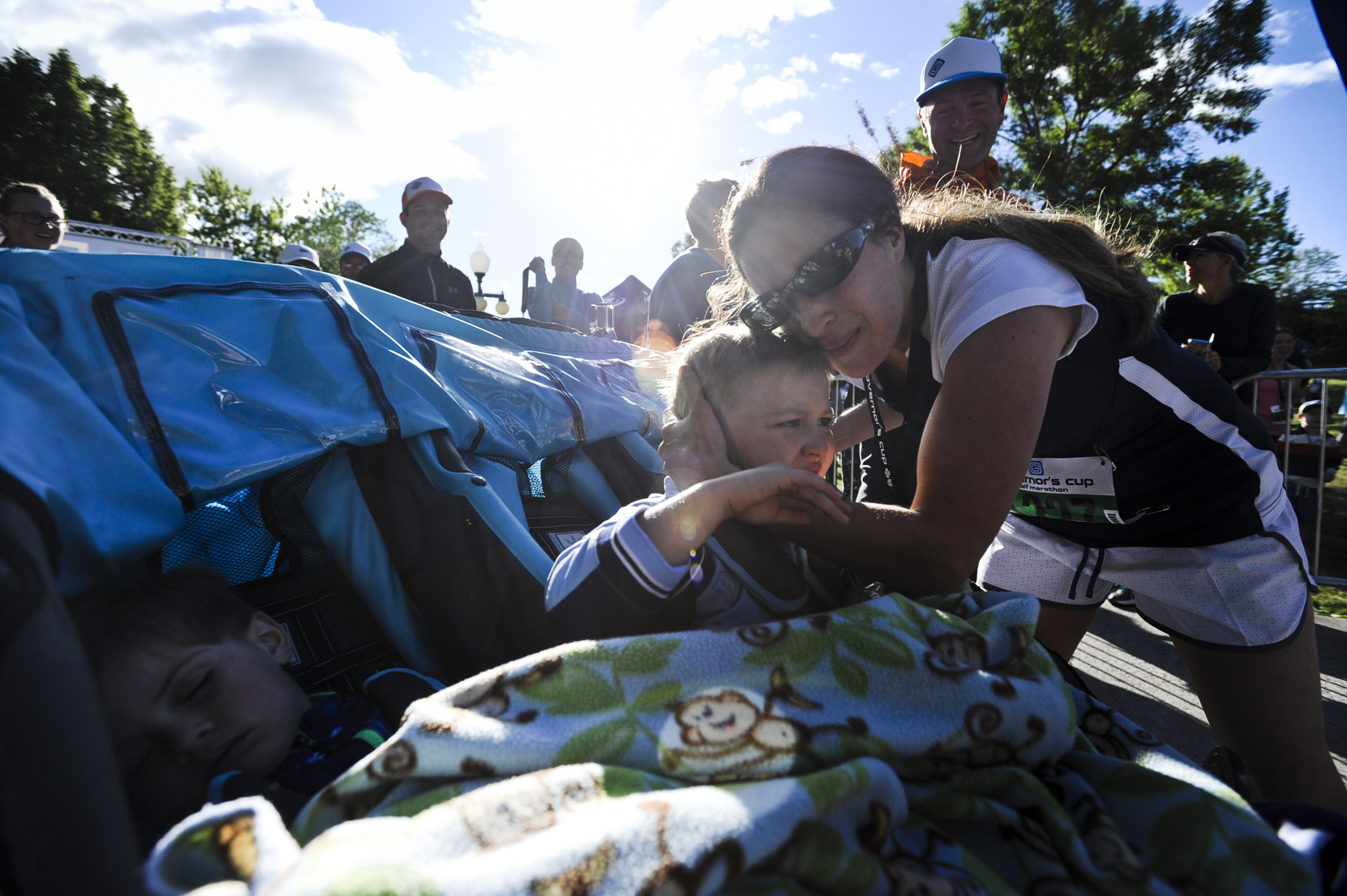 Around that same time, she heard about a mom breaking the world record for the fastest half-marathon while pushing a single stroller. Half-jokingly she thought to herself, “she did it with one child … why not three?!” With the encouragement of family and friends she sent in an application to Guinness World Records and started to prepare for the challenge ahead.

On 10 June 2017, Theresa and her little team put all their preparation into action and broke the record for running the “fastest half marathon pushing a triple pram” at the Governor’s Cup in Helena, Montana. They had no idea at the time that there was even another record out there. Winning the half-marathon gave her and her team the confidence to prepare for their next challenge which her kids appropriately dubbed “The Big Race.” The challenge that lay ahead was to set a new world record by running the “fastest marathon pushing a triple pram.” The goal was to run the race in under 4:30:00 – the qualifying mark set by Guinness World Records. 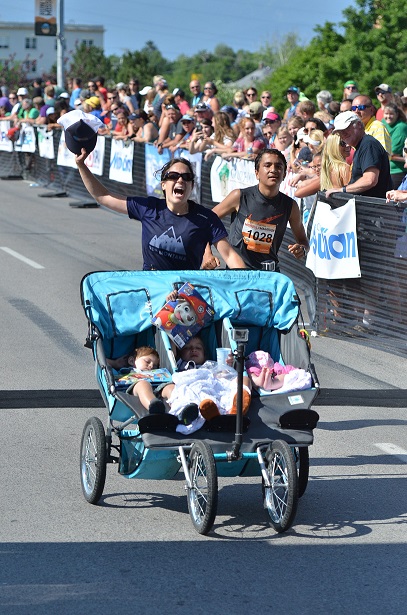 This would be Theresa’s first marathon. She had given birth to her 8th child just five months prior to the race and had no idea what to expect. She realized that there were so many things that could go wrong, but she chose to remain positive and focus on the things that could go right. She was determined to put her best foot forward and enjoy the adventure. Looking back, she comments, “I looked at it as if I was simply touring the countryside with my children on a beautiful summer morning. I figured it was better than sitting at home watching YouTube videos ;).”

Perhaps she also mustered the courage to press forward by reminding herself of the real reason she runs these races. She has said, “My purpose in these races is to not only set an example for my children of mental toughness and help them develop the attitude of ‘No excuses. I can do hard things!’ But that I might share my message of hope and inspire someone else to create an awesome ending to their own story.” She continues, “Anticipate roadblocks. Don’t let them stop you. Climb over them, around them, under them, or break right through them. And keep moving forward. They are part of the challenge and journey, and only make us stronger.”

Early on the morning of 9 July 2017, she and her little team lined up at the starting line of the Missoula Marathon. The gun fired, and with her three little ones in tow, along with snacks, bottles, diapers, fidget spinners, and all the interesting additional supplies needed, she started the long 26.2-mile journey. Many friends, family members, and new friends around the world who knew of their amazing story were there to cheer them on and she could feel their great love and support along the trail.

Her children enjoyed the ride and the scenery and interacting with the other runners for some time, then all three of them fell asleep which enabled her to put all her energy and focus into finishing the course. Theresa admits that it was not an easy trek, and about mile twenty fatigue set in. She was in pain and began to have moments of doubt. She recalls praying and saying, “Heavenly Father, I need your help. Help me fight these doubts and keep going strong mentally and physically. Let the outcome of this race be thy will and let me be at peace with whatever that outcome is.” She said that praying helped her snap out of her moment of doubt, and somehow, she was able to tap into an extra reserve tank that she never knew she had. In retrospect, she has said, “When we’ve come to a point where we think we have reached our limit and can’t do any more, we’ve only accomplished a fraction of what we can do. So, stretch yourself and Keep. On. Reaching!” 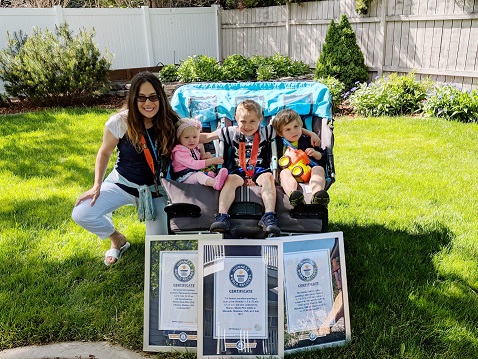 Soon after Theresa noticed another runner nearby, who was struggling, and fighting hard to stay under 4:30. She said, “C’mon. Stay with me. We’ll help each other.’ The more she encouraged him and helped pull him along, the more strength she felt within herself She recalls:

I had lost track of time and wasn’t sure how close to the qualifying mark we were. But no matter the time I was determined to fight to the end and give it everything I had. I rounded the last corner, pushed down the final stretch, and couldn’t believe my eyes as I looked up to see the time on the clock as we crossed the finish line, coming in at an official 4:25:37. We did it. I was filled with a mix of emotions: excitement, relief, joy, and disbelief as I gave my three little ones big hugs and kisses, and medals were placed around our necks.

Two months later, Theresa and her little team ventured out again in order to help raise funds to put towards the hurricane and fire relief efforts, and serve as a reminder that “in order to see the rainbows, we must first feel the rain.” With the Lord’s help she found ways to achieve, and maintain, a very healthy and well-balanced state of being after struggling many years with her own difficult and dark battles with mental illness and ended up beating their previous half marathon record at the Montana marathon in Billings, Montana, coming in at 1:57:49, earning them a 3rd certificate from Guinness World Records!

When asked, “How has your faith been a guiding light in the life decisions that you make?” she responded:

My faith in Jesus Christ and his beautiful Gospel has led me to rise above my default nature to a higher standard and continually motivates me to be a better person, to work harder, and to reach higher in everything I do. Knowing that God can create a much better, happier story out of my life than whatever plan I could come up with on my own, I have lived my life ‘God directed’, trusting and knowing that as I follow His lead I will never look back with regret. It gives me so much confidence to know that there is a higher power out there who is ultimately in control and that he loves us, wants the very best for us, and is there to help us every step of the way.

Theresa says, “This whole experience was yet another testament to me that the Lord does hear and answer our prayers. As we choose to live faithfully, miracles can and will happen.” She also offers this counsel, “Whatever your goal is, start your path in simple ways. Assess where you’re at and then do a little bit more. Just do a little bit more today than you did yesterday. . .. We don’t need to do something big. We just need to do something. When we are all pitching in and doing our own little part, our efforts add up. And you and I really can make a difference! She continues, “Just as we must exercise to develop muscular strength we must work to develop our mental strength. It doesn’t come for free. It takes time and effort and practice. We do this by stepping out of our comfort zone. And by doing things that stretch us, and maybe even scare us a little bit.”

And in conclusion, she says, “The record is neat. But those who are close to me know my heart and know I want to do good with the gifts God has given me. My ultimate endeavor is to be able to share what I’ve learned about overcoming adversity, achieving and maintaining whole-health and happiness, triumphing over our demons, and turning our weaknesses into our very strengths.”