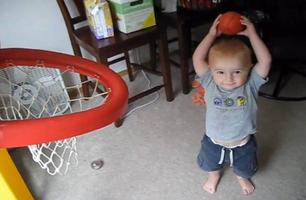 A catch phrase that is often used of young people who exhibit extraordinary talents and abilities is “And a little child shall lead them.” Albeit the phrase is taken out of its Biblical context, it is still perhaps fitting in some ways when describing youngsters such as 2-year-old Titus Ashby, who has become somewhat of a star in his own right. He even has his own fan following of sorts through the numerous videos of his amazing talents on YouTube. He has also become quite the television celebrity, appearing regularly on “Jimmy Kimmel Live!” And, by the way, 2-year-old Tyler Ashby’s family are from Derby, Kansas, and are members of The Church of Jesus Christ of Latter-day Saints (inadvertently referred to as the Mormon Church by the media and others.) 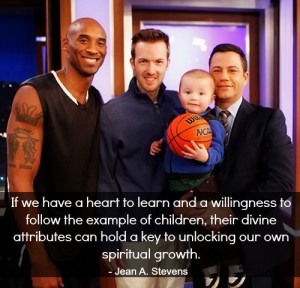 Titus, who has now gained popularity as ‘Trick-shot-Titus”, and his father Joseph, first appeared on the “Jimmy Kimmel Live: show in February 2013. They appeared on the show again on Thursday, 6 June 2013, this time for Titus to participate in a basketball shootout with basketball’s NBA champion, Shaquille O’Neal.

After a friendly greeting of high fives, it was game on. The hoops for each were adjusted to fit their perspective heights. Tyler shot at a 3-foot high hoop from a distance of 6 feet, while O’Neal shot at a 7-foot-1 hoop at a distance of 18 feet. Each player had 30 seconds on the clock to try and sink as many baskets as they could. When the buzzer sounded time, the score was Titus – 8, O’Neal – 0. The 15-time NBA All-Star had been crushed by a 2-year-old up and coming basketball phenomenon. After all was said and done, the two parted with more high fives, and O’Neal presented Titus with one of his EEE-size shoe. 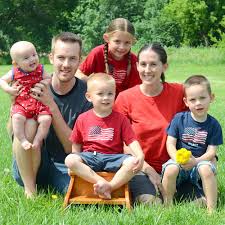 In response to the YouTube video of the challenge, one person commented, “That kid’s gonna realize one day that he beat someone who is arguably the best center in the world.” [2]

Having just defeated NBA champion Shaquille O’Neal on 6 June 2013, Titus was asked to return to the “Jimmy Kimmel Live!” show on Sunday, 9 June 2013, to take on NBA legend and 15-time All-Star Kobe Bryant, in a free throw challenge. Titus again shot at a 3-foot high hoop at 6 feet, while Bryant shot at a 6-foot-6 hoop from 18 feet. First up was Bryant who scored 4 baskets at the end of 30 seconds. When Titus’ turn came, he also scored 4 baskets. Bryant gave Titus of pair of his shoes as a gift.

According to Lakers Nation, the episode was pre-recorded last March as Bryant is currently still healing from his torn Achilles. Three months ago, Bryant tweeted, “Thanks @jimmykimmel for having me! Lil Titus is going to be a beast at bball!” [1] 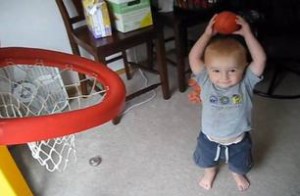 In an overwhelming response to the YouTube video, fans have requested that the next challenge be between Titus and LeBron James.

The Next Big Name in the NCAA and NBA Basketball

The basketball talents of young Titus Ashby are not by far going unnoticed. Gregg Marshall, head coach of Wichita State, has taken a keen interest in Titus’ skills after viewing several of his video clips, and is already asking what year Titus will graduate high school. Titus has also gained marketability as he has also been featured on a national TV commercial produced by Sprint.

“Once we saw the footage, we all fell in love immediately,” marketing communications manager Sara Mocingo told KSHB. “He’s amazing. It’s been really neat having someone from Kansas in the commercial.” [2]

“Titus has always loved balls,” said Kristin Ashby, Titus’ mom, in a phone interview with the Deseret News. “He spends maybe 10 percent of his free time playing with toys, and 90 percent of the time he just gets balls and shoots them.” [2]

With the phenomenal talent that he possess at just 2 years of age, audiences will definitely be watching and following him as he matures, and one day becomes the next big name in the NCAA and NBA basketball. It could well happen, as he is already off on an amazing start.

Mormons Believe Jesus is Our Savior

Marriage and Family is important to Mormons