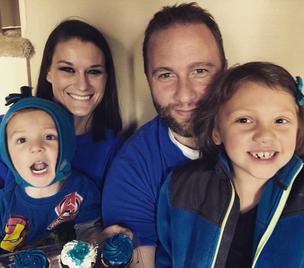 Jared Pike is a member of The Church of Jesus Christ of Latter-day Saints. He married Kelli Pike in December 2015, and the couple are the proud parents of two wonderful children, Ava and Eli. He is also an avid sports fan and his favorite teams include the Washington Redskins, Carolina Tar Heels, Atlanta Braves, and the Charlotte Hornets. He also enjoys going to the movies and says that he sees about 50 movies a year in the theaters.

He started working at 107.5 KZL as an off-air producer in 2007 and worked hard on getting celebrity guests on the show such as John Mayer, Miley Cyrus, Bill Clinton, Barack Obama, and Hillary Clinton. In June 2012, Jared Pike and Katie Tesh became the hosts of the morning show, Jared and Katie in the Morning on 107.5KZL, quickly becoming a hit with their listeners and gaining high ratings. They are joined on the air by Man Kisser Matt (Matt Wells), intern Hugs O’Houlihan (Thomas Marvin), and Jason Goodman, and can be heard Monday through Saturday from 6 – 10am. They have become well known for Jared and Katie’s Phonetap, War of the Roses, Torture Tuesday, Local Talent Tuesday’s, and much more while sharing everything about their lives keeping their audience engaged and entertained.

The Jared and Katie in the Morning show won North Carolina’s Association of Broadcasters Morning Show of the Year for Large Market in 2017 and 107.5 KZL won radio station of the year in same market and nominated for a National Marconi Award in 2017.