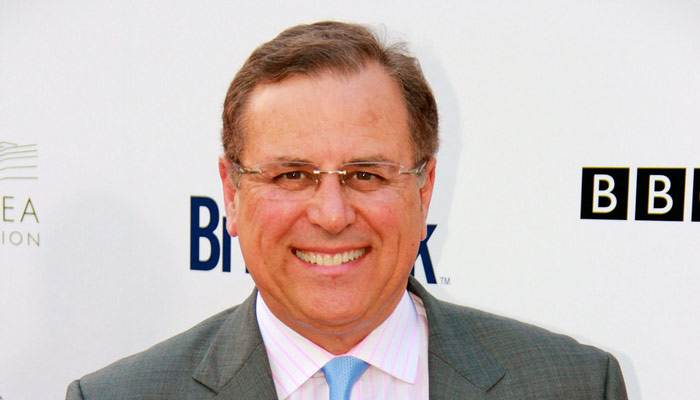 He currently the co-anchor of the KTTV FOX 11 newscast in Los Angeles. He is an award-winning broadcast journalist, writer and television producer.

Carlos had his first experience with the Church of Jesus Christ of Latter-day Saints at age 12 when his step-grandmother, a less-active member of the Church, signed him up with an LDS-sponsored Boy Scout troop. He and his brother both became Eagle Scouts and formed friendships with LDS boys.

One of these friendships led him to attend BYU. He was baptized there and later served as a missionary in the Guatemala/El Salvador Mission from 1973-75. Upon returning, he studied broadcasting at BYU.

Carlos Amezcua is an award-winning broadcast journalist.  Formally  the co-anchor of the KTTV FOX 11 newscast in Los Angeles. Before that he was the anchor of the KTLA Morning Show in the Los Angeles from 1991 to 2007.

He left KTTV in December 2013.  In January 2014, Carlos began hosting the afternoon-drive show on “Patriot Radio”, 1150AM KEIB in Los Angeles

He has covered news around the world as a network correspondent for CBS and as an anchor/reporter in such major markets as New York, San Diego and Denver. He has also appeared on the “CBS Evening News” with Walter Cronkite, “NBC Nightly News” with Tom Brokaw, CNN and HBO’s “America Undercover.”

Carlos has been the recipient of numerous awards, including six Emmys for his journalistic efforts covering such stories as the devastating Northridge earthquake, the Malibu fires, the McDonald’s Massacre in San Diego, and an Emmy for “Outstanding Journalistic Enterprise” covering Mexican politics.

Carlos’s ancestors came from Spain in the late 1500s and later settled in the San Diego, California area. He had his first experience with the Church of Jesus Christ of Latter-day Saints at age 12 when his step-grandmother, a less-active member of the Church, signed him up with an LDS-sponsored Boy Scout troop. He and his brother both became Eagle Scouts and formed friendships with LDS boys.

One of these friendships led him to attend BYU. He was baptized there and later served as a missionary in the Guatemala/El Salvador Mission from 1973-75. Upon returning, he studied broadcasting at BYU.

“The gospel keeps you grounded,” Carlos said. “On a regular basis I meet with a president, or a movie star, and pretty soon it is easy to start to think you are like these people. Trust me, you are not.”

In his spare time, he enjoys golf, surfing, skiing, watching hockey games, and spending as much time as he can with his family. Carlos, his wife Mary, and their five children make their home in the Los Angeles area.

Carlos explains the importance of his family by sharing the following experience. In 1984 when he was working in San Diego, he was sent to cover a shooting at a restaurant. He was the first reporter on the scene and witnessed what became a massacre by an out-of-control gunman.

Carlos said, “I saw little children and women getting shot and killed. He shot at me, and it was very frightening. When it was all over, I went home and hugged my children and cried big tears. I sought out the Lord in fasting and prayer. That, and my wife, Mary, helped me through all of it.”

Carlos added, “There are also a lot of wrecked families in the media business. Every day you read about somebody in the media getting a divorce. The center of my life has always been my family—my wife and my children. I love the Church, and my family keeps me going. My family is more important than television news; it is the center of my focus. It is a very real threat to a family when Dad doesn’t pay attention to home.”

His first job was in Salt Lake City at KSL-TV, Channel 5, and his first reporting was with popular television personalities such as Dick Nourse, Bob Welti, and Paul James. Carlos said, “I reported, I vacuumed the newsroom floor, and I went for cheeseburgers. I felt really blessed and lucky to break into the competitive news business.”

A little-known fact is that Carlos has a gold record! He fulfilled one of his lifelong dreams when he got the chance to work with the legendary rock band Chicago. The trumpet player Lee Loughnane asked him to write Spanish lyrics for “Let it Snow” and Loughnane sang the song in Spanish. It is the only Spanish track on Chicago 26, known as “The Christmas Album.”

Since moving back to California, Carlos created and produced the critically acclaimed “Comedy Compadres,” the first all-Latino stand-up comedy program in Los Angeles that aired on KTLA. Carlos is active in the community, serving on various charity boards and professional organizations.

Carlos is an avid fan of the NFL’s San Diego Chargers. Back in college, he made a lamp using a Chargers helmet for the base, and during the football season, he brings that into the studio on Mondays to show his support for the Chargers.

Other on-air duties and appearances include guest-hosting radio sports shows, as well as serving as the on-air voice for the annual Latin Grammy Awards broadcast. He has appeared in many films and television series including 7th Heaven andBuffy the Vampire Slayer.

Carlos is also a talented artist. His oil paintings have been exhibited at many art galleries and shows.

Carlos recognizes the contrast between reporting the news on a daily basis and the joy he finds in painting. He said, “My career as a newsman has been exhilarating and personally rewarding. However, in a world of turmoil and scandal I find great peace in art. As a journalist I am charged with presenting the news in a balanced and forthright manner, no matter what the circumstance. As an artist I can take chances and create a world uniquely my own. I sincerely hope that each piece of art reveals to you my deepest creative emotions and fills your heart with joy.”