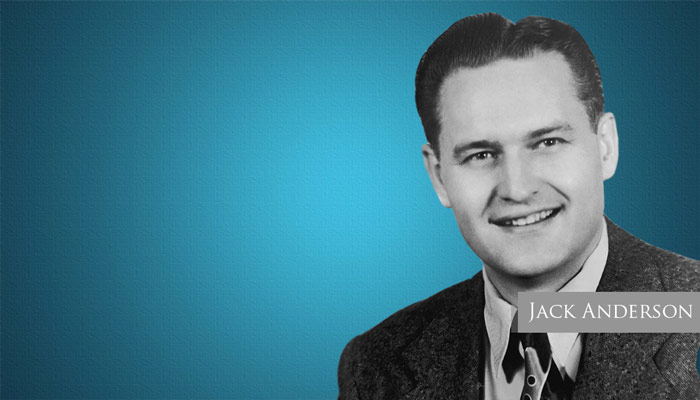 Anderson started his journalism career when he edited a Deseret News Boy Scout column as a 12-year-old. Six years later, he took a job at the The Salt Lake Tribune. He briefly attended the University of Utah. After serving an LDS mission and being drafted into the Army, Anderson in 1947 applied for a job with Drew Pearson’s “Washington Merry-Go-Round” column – a job he never left.

He became a national journalist when he was recruited to work on the The Washington Post. He was a strong opponent of Joe McCarthy and along with other liberal journalists, played an important role in his downfall. He writes the Jack Anderson Confidential, an in-depth monthly newsletter. He has achieved many important stories including the discovery of the CIA plot to kill Fidel Castro. In 1972, he won the Pulitzer Prize for his journalism. His autobiography, Confessions of a Muckraker, was published in 1979. Other books include The Washington Money-Go-Round (1997).

Jack Anderson spent many decades as a leading newspaper columnist and is considered one of the fathers of modern investigative journalism. One of Jack’s career highlights was when he won the 1972 Pulitzer Prize for National Reporting for his investigation on secret American policy decision-making during the Indo-Pakistan War of 1971.

Jack was a key and often controversial figure in uncovering such stories as J. Edgar Hoover’s apparent ties to the Mafia, the Watergate scandal, the John F. Kennedy assassination, and the search for fugitive ex-Nazi German officials in South America.

Jack also discovered a CIA plot to assassinate Fidel Castro and has been credited for breaking the Iran-Contra affair in the 1980s.

Jack was so well-known for being a crusader against political corruption in the nation’s capital that in 1972 he was the target of a Mafia-style hit, allegedly ordered in the White House by President Richard Nixon.

Two Nixon administration conspirators admitted under oath they plotted to poison Anderson on orders from a top aide to the President. The attempt was foiled when the plotters were arrested as a result of the Watergate break-in.

President Nixon had long been angry with Jack. He blamed the columnist for his loss in the 1960 presidential election because of a story Jack had written that year about a secret loan from Howard Hughes to Nixon’s brother.

Jack was diagnosed with Parkinson’s disease in 1986. In a speech he gave years later, he made light of the occasional, uncontrollable shaking the disease caused. He said, “The doctors tell me it’s Parkinson’s, but I suspect that 52 years in Washington caused it.”

In July 2004, at the age of 81, Anderson finally retired from his syndicated column, “Washington Merry-Go-Round.” The accolades poured in for this talented, determined reporter who always sought the facts.

Mark Feldstein wrote the following tribute to Jack in The Houston Chronicle on July 31, 2004: “He was a strict Mormon who viewed investigative reporting as a noble calling from God. He believed as a matter of theology that life is an eternal struggle between good and evil, and that the First Amendment was quite literally a divinely inspired charter that sanctioned his muckraking mission. He provided a vital check on governmental power during a time when journalists preferred to socialize with public officials rather than investigate them.”

Jack passed away on December 17, 2005. He is survived by his wife, Olivia, and nine children.