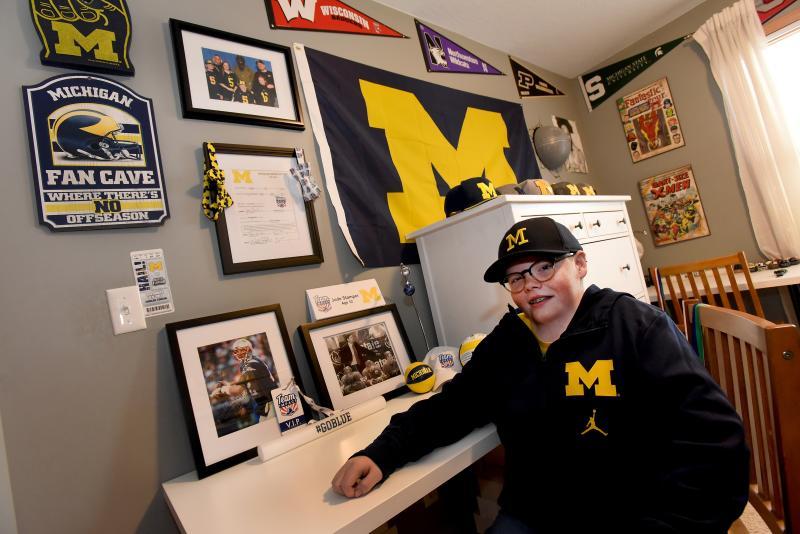 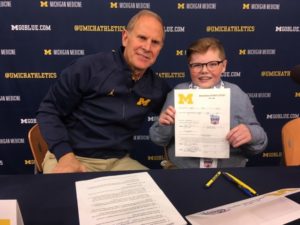 Jude Stamper, a 12-year-old Mormon from Monroe, Michigan, was born with Arthrogryposis Multiplex-Congenita, a disorder in which joints are not formed correctly and cannot bend normally. He loves sports; however, he is confined to a wheelchair with limited mobility. His hopes of ever being an active part of a team were nothing more than a dream until recently when the University of Michigan basketball team and Team IMPACT made it possible for his dream to come true.

According to the Deseret News, “The Stampers became involved with Team IMPACT, a nonprofit dedicated to connecting children with serious illness to collegiate teams, after seeing a young boy with a disorder sign with the Michigan football team. After being accepted and working closely with the organization, the Stampers were paired with Michigan basketball a few months later.”

Jude signed a National Letter of Intent with the Wolverines on 6 November 2017 which coincided with National Signing Day. Coach John Beilein told Landof10.com, “We are so very pleased to welcome Jude to the Michigan basketball family. Jude brings great passion and enthusiasm to this program and we are honored to have him on our team. We will continue to work hard toward another championship and know that Jude’s presence will be an important part of our journey.” Jude goes to practices, watches film, and even has dinner with the team at times. 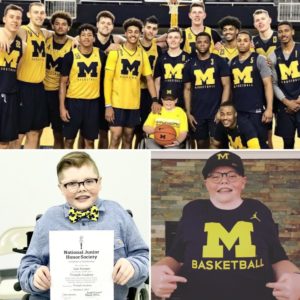 Michigan basketball signed him for the game against the Rutgers on 21 January 2018. He was honored mid-court prior to the game. He was joined by his father, Nate, along with members of the Maize Rage, Michigan’s student section. He was given a Maize Rage T-shirt during the ceremony. Several people, including Jalen Rose, current sports analyst for ESPN and former player for Michigan, head coach, John Beilein, the coaching staff, and Maize Rage members wore Block M bow ties in Jude’s honor.

Jude’s mom, Courtney Stamper, told Deseret News, “They have embraced him. Coach Beilein absolutely loves him and he tells him that. He tells him he is a light in their lives. They have fully opened their doors not only to Jude, but our family.”

Courtney also recalled her first routine ultrasound while pregnant when she found out that Jude could not move his legs. The doctors told her and her husband, Nate, that they should consider terminating the pregnancy. However, they told the doctors that terminating the pregnancy was not an option and “[they] would have [the] baby and leave it up to the Lord.” When Jude was born, doctors told Courtney and Nate that he would never be able to walk. 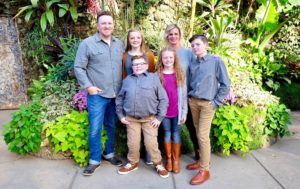 Jude has exceeded the doctor’s expectations and can walk short distances. He stays in his wheelchair most of the time due to a lack of balance. During his childhood he has undergone 10 surgeries at University of Michigan C.S. Mott Children’s Hospital. The most recent surgery was in 2013 when his neck was reconstructed to give him more mobility. Despite all the medical challenges that he has faced, Jude maintains a positive attitude and is an inspiration to others. His mother said, “We tell him all the time, ‘What you can’t do physically, you’re able to do socially by uplifting others. You’re showing others, ‘Wow, look at this. I can’t play sports, but I’m on the Michigan basketball team. If you have a dream, you can reach your dream.’”

Courtney Stamper is a convert to The Church of Jesus Christ of Latter-day Saints. She was baptized at age 23. She and her husband Nate were high school sweethearts. She and her family are one of two LDS families at their kids’ school, Triumph Academy. She further commented that it has been a great way for Jude to let his light shine and to be an example to others.

Courtney and her family believe in the resurrection and trust that one day, Jude will “be able to run and do everything he’s ever dreamt of.”