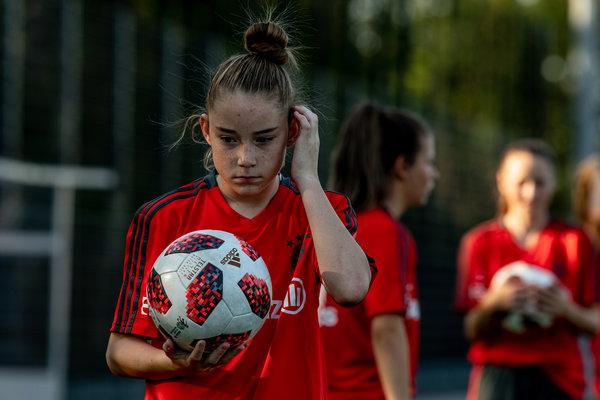 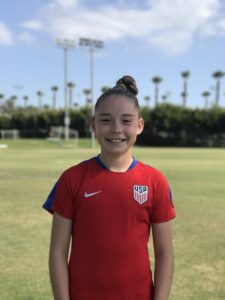 The iconic sportswear brand, Nike, sponsors some of the world’s top athletes like LeBron James, Serena Williams, and Cristiano Ronaldo. Recently added to the list is a 13-year-old Latter-day Saint soccer phenom. Her name is Olivia Moultrie – a Beehive from Canyon Country, California.

Olivia, the oldest of three Moultrie girls, comes from an athletic family. Both of her parents competed in intercollegiate sports. Her father, K.C., played basketball and her mother, Jessica, was a college soccer player. Her 11-year-old sister Gabriella loves to play basketball while seven-year-old Bella usually has a soccer ball at her feet. Some sort of ball is always bouncing about the Moultrie household. K.C. said, “Sports help define the family. We all love to compete. … It’s just a part of us.”

Olivia started playing soccer in her local youth league at the age of four, and as her father recalls, she learned early to “make friends” with the ball. He also recalls that even from a young age, Olivia was very fast and aggressive. By the time she was nine, she had gained the attention of the soccer community in Southern California, and before long, she was playing with older athletes to challenge her advanced skills and to help her grow. She and her family recently moved to Oregon to be closer to the Portland Thorns organization of the National Women’s Soccer League to continue her development, although she is not a rostered member of the team. 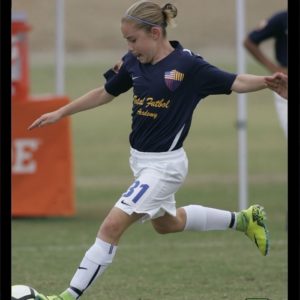 Olivia appreciates her family and credits them and her faith for keeping her anchored. She said, “We always say in our family — ‘It’s faith. Then family. Then soccer.’ That’s what means more to me than anything. That’s what always comes first, and I just try to be the best person I can possibly be.”

She is the youngest American women’s soccer player to turn pro after recently signing an endorsement deal with Nike. She also signed with Wasserman, a sport and entertainment agency that represents such pro athletes as Tony Finau and others. The news of her stepping away from the amateur ranks has captured the headlines of globally read publications like the New York Times, Sports Illustrated, and USA Today.

She first made news in the soccer community a couple of years ago when, at 11, she verbally committed to play at the University of North Carolina, an elite women’s college soccer program led by legendary coach (and Church convert) Anson Dorrance. She made a cameo appearance in a Nike commercial that aired during the recent Academy Awards, featuring Serena Williams, Olympic champion gymnast Simone Biles, and Latter-day Saint youth football sensation Sam Gordon. She has also represented the United States in international competition and has trained with top-level boys at the U.S. Soccer Development Academy. She told the Church News, “It’s been super exciting for me. I’m just ready for us to start this new chapter.” 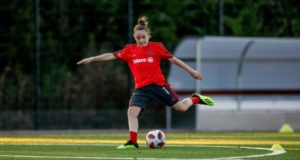 Olivia’s mom and dad say when she steps off the playing field, she’s a full-fledged 13-year-old. Her father said, “The best times for Liv are when she is with her sisters; when she can be silly. She loves them and they love her. As parents, those are our favorite moments.”

The Church News reports that even as Olivia navigates largely uncharted waters for a young athlete, the family plans to draw upon their faith and family bond for ongoing direction. Olivia’s father said, “We are at a time and place with our family where we need those blessings. … We know our Heavenly Father will hear our prayers and answer them and put us in a position where we can make good decisions for our kids.” Olivia said, “I just want to keep developing and getting better every single day.”