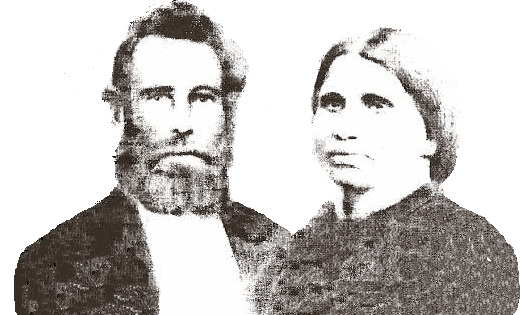 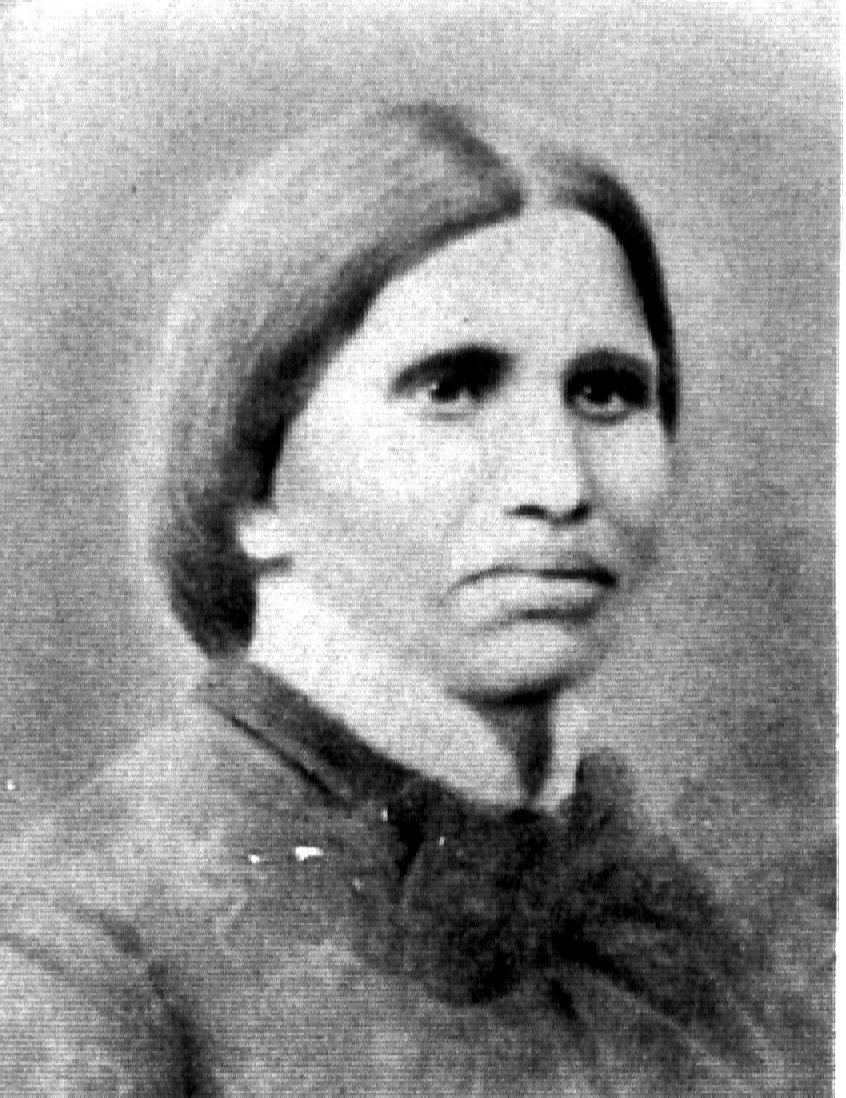 Elizabeth Xavier Tait was one of the early pioneers of The Church of Jesus Christ of Latter-day Saints (often referred to as “the Mormon Church”). She was born on 23 December 1833, in Mumbai (Bombay), Maharashtra, India, to a wealthy family. Her great-grandfather was Portuguese. She was also a member of the Willie handcart company.

Elizabeth met her husband, William, a widower, when he was stationed in India as a member of Queen Victoria’s Army, serving as a regimental drill master. He was born in Ireland on 3 November 1818. He had been baptized by Parley P. Pratt in Scotland. Elizabeth’s father, who died when she was 10 years old, had also been in the service of the Queen. 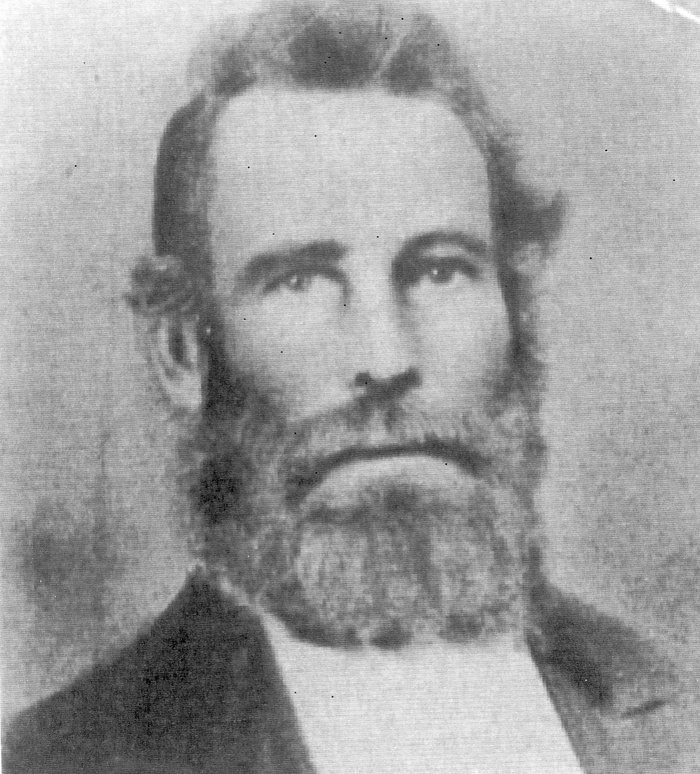 William and Elizabeth were married on 21 January 1850, when she was just 16 years of age. William baptized her in October 1852 in Poona, India. The couple lived in Poona for several more years and were faithful and active members of the local branch but yearned to make the journey to Zion. Elder Hugh Findlay’s journal tells of the Taits opening their home to the missionaries and members; inviting others to hear the gospel and attend church services; William’s baptism of Elizabeth and others; and William bearing testimony, speaking in tongues, and healing the sick.

After William’s time in India was completed, the couple made plans to join the Saints in Utah. In March 1855, William and their young son, John (1852-1917), left on the ship Mary Spencer for China. They then obtained passage to California and then traveled to Utah and settled in Cedar City. Elizabeth, who was eight months pregnant at the time, remained in India with her family until after the birth of the baby. The baby, Mary Ann, was born on 22 April 1855.

Elizabeth’s family tried to deter her from leaving to join her husband and son in Utah. In 1856, determined to gather with the Saints, she took her newborn baby, left her family behind, and booked passage on the next ship with the first port of call in Liverpool, England.

After crossing the Atlantic by boat, Elizabeth then took the Enoch Train to Iowa. It left on 22 March 1856, earlier than most of the Willie company on board the Thornton, which did not leave until May. Elizabeth may have waited at New York or Iowa to go with the Willie company because that company included friend and missionary, Allen Findlay, who was returning from the Bombay Mission. Findlay married Jessie Ireland, of Scotland, a few days after leaving Liverpool, on board the Thornton. Elizabeth probably traveled with Brother and Sister Findlay and Sister Findlay’s mother, making the typical four or five people to each handcart. 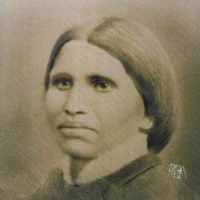 She made the journey across the eastern United States with her infant daughter, who died on 1 July 1856, in Iowa City, Iowa. The cause of death was pneumonia. Her daughter would be her second child to die. In June 1853, her first-born son, William James, died suddenly of cholera when he was just a few years old. After burying her daughter, she journeyed alone across the plains with the Willie handcart company.

Along the way Elizabeth endured hunger, fatigue, and cold unlike anything that she had ever experienced in India. She survived the ordeal and was eventually reunited with husband as he and other members of the rescue party rushed out to bring the Willie and Martin companies in from the plains. Elizabeth and William spent a short time in Salt Lake City, and then traveled by ox team and wagon to Cedar City where William had settled previously with their son. The journey took three weeks.

Besides teaching school, William Tait also taught the sword drill to soldiers, served on the committee to plan the building of the Old Tabernacle in Cedar City, Utah, and served as a temple worker in the St. George Temple. He died on 29 October 1896 at the age of 77 in Cedar City, Iron County, Utah. He is buried in the Cedar City Cemetery. 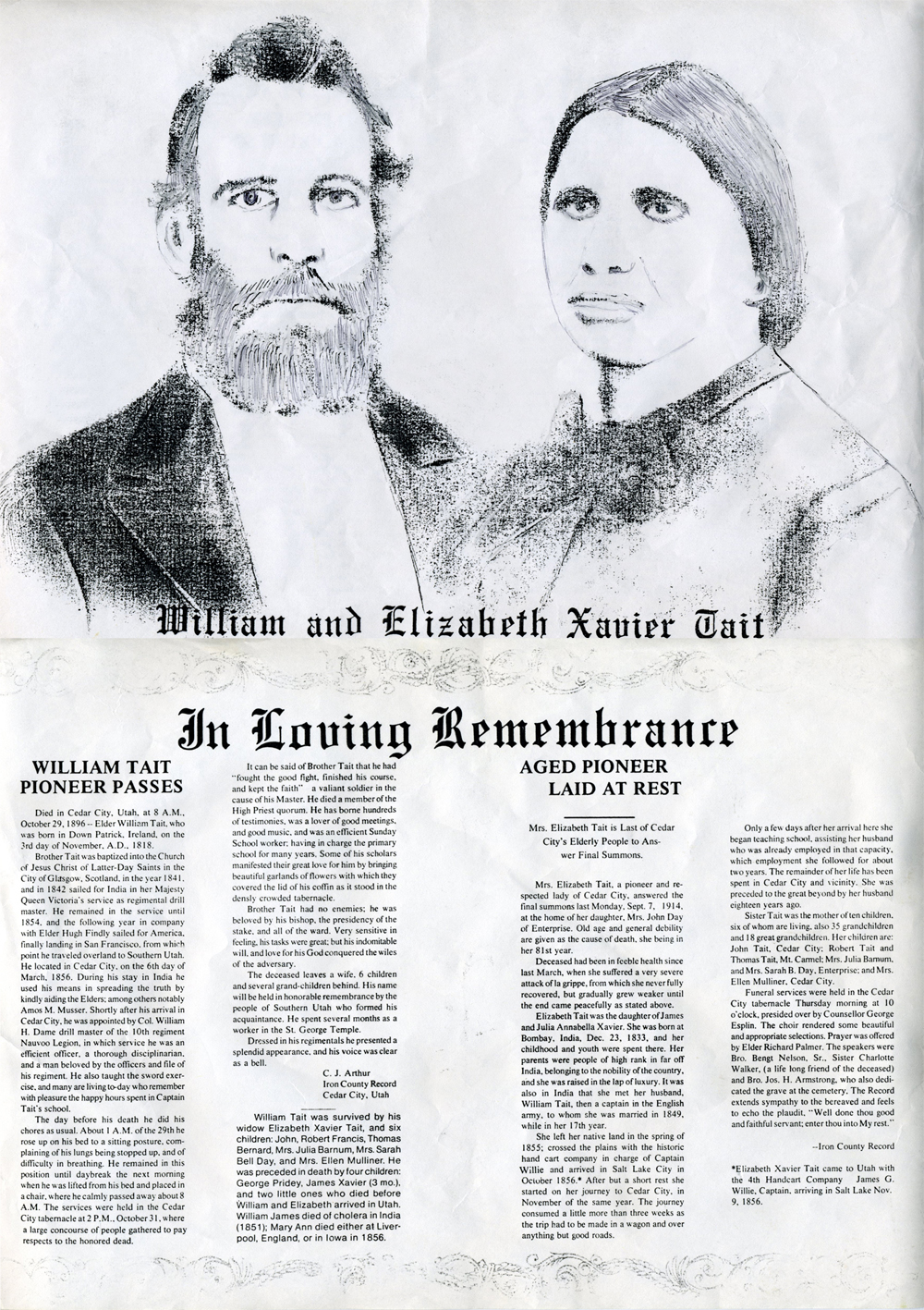