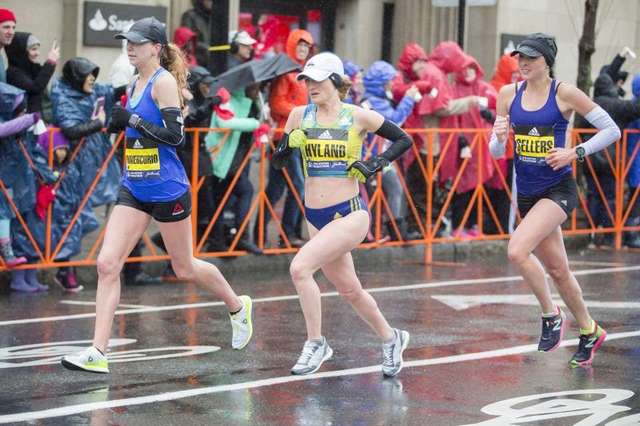 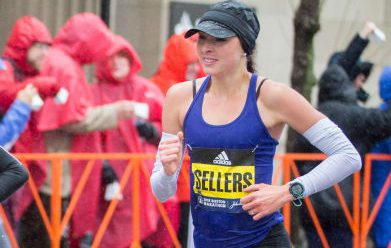 Sarah Sellers (nee: Callister), a 26-year-old LDS nurse anesthetist at Banner-University Medical Center in Tucson, Arizona, is a virtual unknown in the world of marathon races, but she crossed the finish line in second place at the prestigious 26.2-mile Boston Marathon race on Monday, 16 April 2018, in rain-soaked, windy conditions, running her second 13.1 miles faster than her first. MSN.com reports, “Few online road-race results existed for Sellers, and she was not listed among the elite field for Boston.” Her time of 2 hours 44 minutes 4 seconds which has been deemed “improbable,” put her in second among the seven American women who placed in the top 10, with Desiree Linden being the first American woman to win the race since 1985.

Sarah, who LDS Living reports, “wore a nondescript outfit, with no visible sponsors, and crossed the finish line by simply clicking the timer on her watch,” says that she still cannot believe that she finished second. In a telephone interview Monday afternoon with MSN.com, Sarah said, “I mean, I still can’t believe I finished second. I’m going to wake up and this will be a dream.”

Sarah never had any plans to podium at Boston. She grew up in Ogden, Utah, and attended Weber State University where she was considered “one of the most sought-after prep runners in the state of Utah.” Her main events were the 5-kilometer and 10-kilometer, and she ran cross country, but she never made nationals as an individual athlete. In 2012, she was named Weber State’s female athlete of the year.

She even qualified for the Boston Marathon after winning the Huntsville Marathon in Utah in September 2017, with a time of 2:44:27, beating 194 other women, and landing her in the fastest division. She only signed up for the Boston Marathon because her 24-year-old brother, Ryan Callister, was running it. Ryan finished the race in 2:48:20, 4 minutes and 16 seconds behind his sister.

To prepare for the race, Sarah mainly trained by herself. She had to fit in all her workouts at 4 a.m. before work or 7 p.m. after her 10-hour shifts at Banner Health Center. She trained six days a week, sometimes two workouts a day, with Sundays off, running up to 100 miles a week. 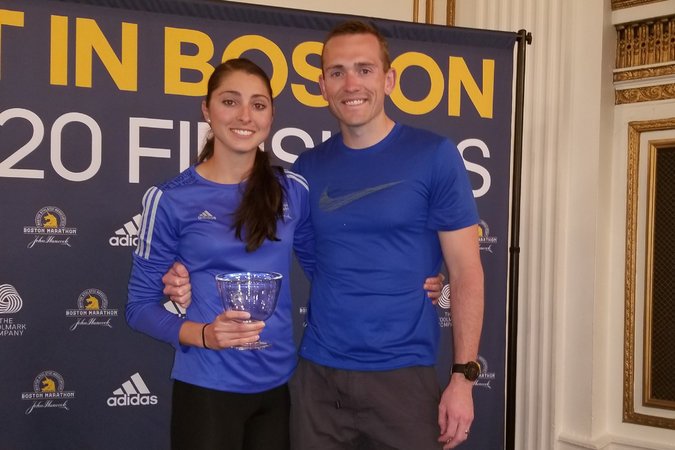 Sarah told MSN, “I honestly didn’t think I would have anything to celebrate.” She continued, “Obviously the conditions were the wild card that everyone got dealt, but I think it played to my advantage. Looking at my time going into the race, I shouldn’t be on the same page as any of the top 20 women. … They’re in a different league than me.” She still views the professional runners she beat as idols, not peers, commenting to the New York Times, “Some of the women I was passing, it was just complete disbelief. I look up to them extremely and in no way do I consider myself on their level at all.”

In a telephone interview, her Utah-based coach, Paul Pilkington, who watched the race from home on television, said he knew Sarah to be “very gritty and tough in adverse conditions. And yet, I never thought she’d get second.”

Sarah earned $75,000 for her second-place finish. She said that the money would go toward paying off her and husband’s student loans. She plans to keep working at the hospital, but also will try to balance her sleep and training better. She wants to qualify for the “A” standard for the 2020 Olympic marathon trials (2:37) – and intends to run another marathon this fall. She said, “I want to run another marathon. On a faster course — and in better weather.”

Sarah celebrated her second-place win by treating herself to a few leisurely activities she didn’t have time for before Boston, like mountain biking and running on trails. On Wednesday, 18 April 2018, she returned to work at Banner-University Medical Center to work a nursing shift.

Setting Her Sights on the 2020 summer Olympics

Sarah Sellers had initially set a goal to hit the ‘A’ standard Olympic qualifying time of 2 hours, 37 minutes earlier this month at the Boston Marathon. However, as it turned out, the wet, windy, and miserable weather conditions were not in her favor. So, she abandoned that goal, but still hit the ‘B’ standard with her time of 2:44:04 (the ‘B’ standard is 2:45:00).

She told KSL.com, “I still don’t feel like it’s quite a reality yet, but I’m really excited because it’s definitely very motivating to try really hard and to train smart, because there’s a lot of really good marathoners in the U.S.”

Sarah qualified for the Olympic trials, which will be held 29 February 2020, months in advance of the Summer Olympics in Tokyo. She said, “I don’t know what my potential is there, but I think I’m definitely motivated to do everything I can to do the best I can at the trials. In the meanwhile, she is taking it easy to help her body recover from the marathon. She will try to incorporate things like strength training and biking, but has no plans of running a race for a while as she recovers.

Her Weber State teammate and training partner who also qualified for the 2020 Olympic trials with a ninth-place finish at the Chicago Marathon, Taylor Ward, said, “She [Sarah] has a legitimate chance at making the Olympic team. Being in the top three at Boston is more difficult than making an Olympic team.”