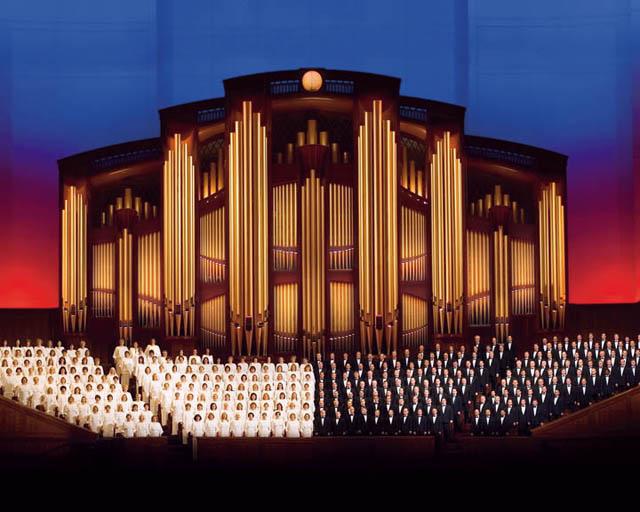 Terfel has recorded numerous award-winning CDs and performed in major opera houses around the world.

This Commander of the Order of the British Empire, (bestowed upon him by the Prince of Wales), is an operatic virtuoso since his 1990 debut in the Welsh National Opera.  Most recently, he received a Grammy for his work in the Metropolitan Opera’s version of Wagner’s Der Ring Des Nibelungen. 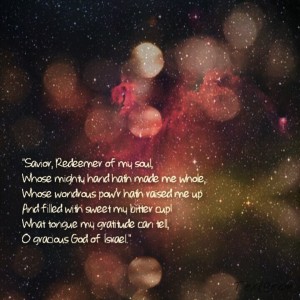 “It will be filled with wonderful Americana songs that Bryn has especially requested to perform with the choir. So we’ll be singing some familiar, some that we have even recorded before, but new arrangements have been written,” said Ron Jarrett, president of the Mormon Tabernacle Choir.

The choir  started recording in May 2013 and Terfel appeared in the broadcast on Mother’s Day where everyone was invited to attend in the Salt Lake City Tabernacle.

What is the Mormon Tabernacle Choir?

The Mormon Tabernacle Choir has been called many things: an American icon, a symbol of freedom, a holiday tradition, and the greatest choir in the world. Why is the Choir universally recognized and lauded? Of course, it makes great music, but perhaps more central to its success is the ability of the 360 members of the Choir to lift the spirits of people of diverse cultures, ages and religions all over the world.

One of the oldest and largest choirs in the world, the Mormon Tabernacle Choir has performed before presidents and kings, sold millions of records, won scores of awards and enthralled audiences in more than 28 different countries.

The Choir is composed of 360 volunteer singers ages 25-60 — all exceptionally talented musicians. Based in Salt Lake City, Utah at the headquarters of The Church of Jesus Christ of Latter-day Saints, the Choir is composed of faithful members of the Church. They practice and perform weekly and are accompanied frequently by the Orchestra at Temple Square.

West of the Salt Lake Temple of The Church of Jesus Christ of Latter-day Saints, (often mistakenly called The Mormon Church), stands the historic “Mormon” Tabernacle, home to the choir. The Mormon Tabernacle Choir got its name from the structure.

Accompanying the choir in the great auditorium is the 11,623-pipe Tabernacle organ, featuring prominent golden pipes made of round wood staves, hand-carved from Utah timber. Ten pipes from the original organ, built in 1867, are still functioning today.

The choir is best known for its weekly Sunday broadcast, Music and the Spoken Word, which originates from Temple Square in Salt Lake City. This program is the oldest continuous nationwide network broadcast in America.

Ronald Reagan, president of the United States from 1981 to 1989, dubbed the Mormon Tabernacle Choir “America’s Choir” in 1981 when the choir sang at his inauguration.

Concert tours over the years have taken the choir to the great concert halls of North and South America, Europe, Asia and the Pacific. 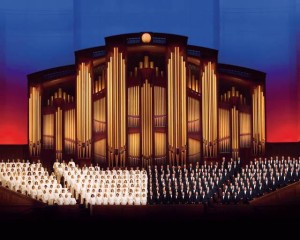 During the Winter Olympics in Salt Lake City — 8-24 February 2002 — the choir performed at the official closing ceremonies.

The choir’s recordings have earned two platinum and five gold albums, including a Grammy Award-winning rendition of “Battle Hymn of the Republic.” The choir has recorded with some of the world’s great orchestras, including the Philadelphia Orchestra, the New York Philharmonic Orchestra and the Jerusalem Symphony Orchestra.

The Mormon Tabernacle Choir seeks to do more than just perform or gain any sort of personal vanity or notoriety.  The Choir’s purpose is to spread joy and peace through music.  The Choir was even honored in 2006 as a Laureate of the Mother Teresa Award by the St. Bernadette Institute of Sacred Art.

“The Mormon Tabernacle Choir was honored…for “edifying the world through inspirational choral performances and recordings.”

“This is the only choir I know that has touched the entire world with its beauty,” said Dan Paulos, director of the St. Bernadette Institute of Sacred Art, “There are a lot of choirs out there, but none so remarkable. It’s a gift of God and it should be shared with the world.”

“The Mother Teresa Awards were created to honor those who beautify the world through their unique gifts and talents. The award is a statuette of a modernized Mother Teresa, and was created by R.S. Owens Company of Chicago, who produces the Oscars for the Academy Awards.

When was the Mormon Tabernacle Choir formed?

The Mormon Tabernacle Choir originated in the mid-19th century in Salt Lake City. As the Latter-day Saints moved west, Church President Brigham Young included musicians among members of the advance parties. Consequently, a small choir first sang for a conference of the Church in the Salt Lake Valley on 22 August 1847, just 29 days after the first pioneers arrived.

The origins of the Mormon Tabernacle Choir may be found in the desire and commitment of early converts to include appropriate music in both sacred and secular events.  In fact, there always has been a standing choir at the Church headquarters — from early Church locations in Kirtland, Ohio, and Nauvoo, Illinois, to current headquarters in Salt Lake City.

The release of a CD with the experienced and deeply talented Bryn Terfel in September is sure to be a Mormon Tabernacle Choir CD not to miss.

What Do Mormons Believe About Jesus Christ