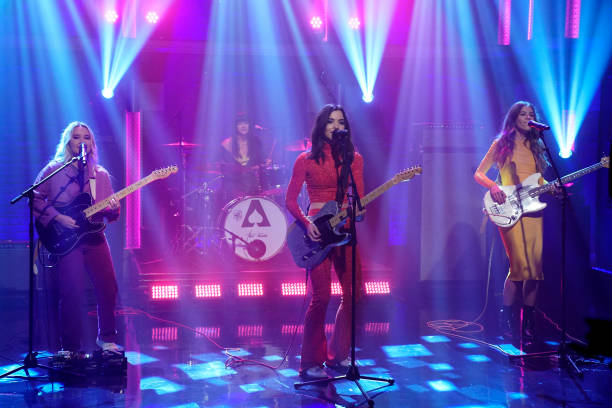 The Aces are an all-girl band that started in Provo, Utah. They made their late-night debut on May 17, 2018, on NBC’s Late Night with Seth Meyers.  They sang “The Last One” a song from their new album “When My Heart Felt Volcanic.”  After the show, they had a second performance where they sang “Waiting For You.” Both songs were posted on Seth Meyers’ YouTube channel and have received almost 40,000 views.

The Aces were formed back when the girls were still in middle school and originally called themselves The Blue Aces. McKenna Petty (bassist), Cristal Ramirez (vocals, and guitar), and Alisa Ramirez (drums) started practicing every day after school doing covers and writing their own music. The girls were dedicated to making the band work and to be successful and had no problems practicing every day.  None of them had received any training on their instruments and each figured out how to play through self-teaching and YouTube videos. Katie Henderson became friends with the girls and came on as the lead guitarist a few years later.

The Aces have had the opportunity to perform for a variety of different venues. When they first started they would perform at small venues in the Utah Valley and as they got older they were invited to perform on even bigger stages. They had the opportunity to open for big bands such as Neon Trees as well as Tim McGraw at the 2016 Stadium of Fire.  They have played at the Bonanza Weekend Concert for a few years and are always a crowd pleaser. This year the Bonanza Weekend Event will feature well-known artists, Hasley, Wiz Khalifa, and Zhu. They will also be performing at the Firefly Festival and Lollapalooza this year.

The Aces’ music videos receive hundreds of thousands of views, each being close to half a million views on YouTube and it is expected that the girls’ success will just continue to grow as they get their name out there.