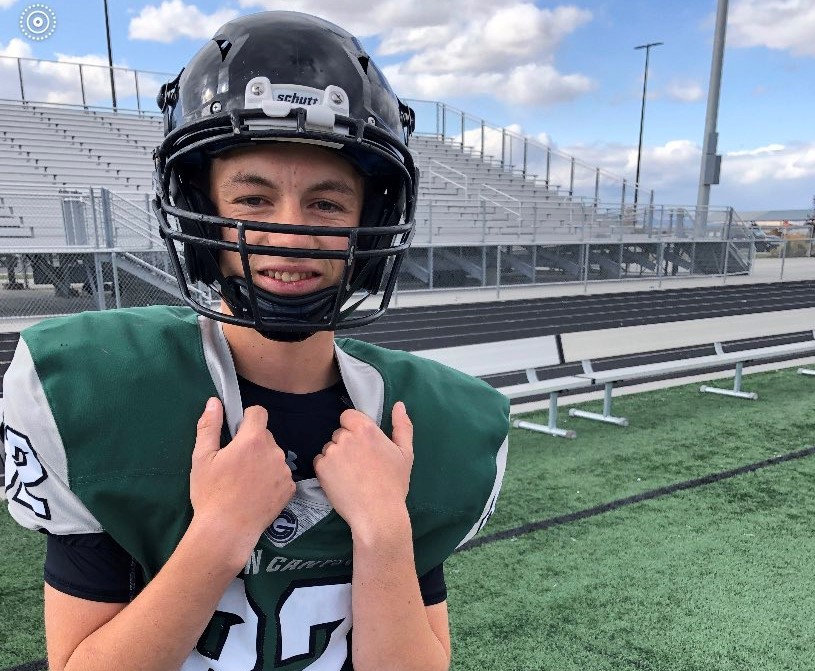 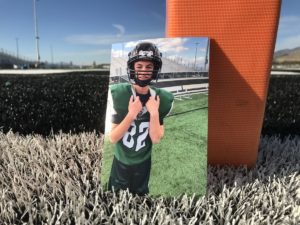 Jonny Stott is a member of The Church of Jesus Christ of Latter-day Saints (often referred to as “the Mormon Church”) and a senior at Green Canyon High School in North Logan, Utah.

Ever since Jonny was a little boy he has always wanted to play football. However, he was born with a rare genetic mutation known as spinal muscular atrophy with lower extremity predominance (SMA-LED) that left him with muscles in his legs, feet, arms, shoulders, face, and elsewhere paralyzed. He has been a valuable part of the team for the past three seasons as he has helped manage the team from the sidelines.

Most children with mutations similar to Jonny’s do not live through childhood and spend what few years they have in wheelchairs. Cache Valley Daily.com reports that Jonny’s “quiet grit, determination, goodness, and inability to back down or give up have inspired thousands. He simply works at it until he figures out a way – Jonny’s way.” Since the day he was born, he has been told: “no you can’t.” Statements like, “You will never walk, run, ride a bike, or play sports,” became a part of his reality. Nevertheless, Jonny was determined to not let his illness define him and his response has always been “Watch me!” 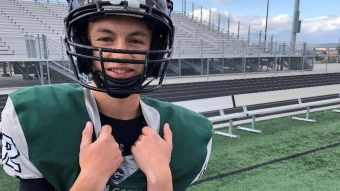 Setbacks and surgeries are a common part of Jonny’s life. As a child, speaking and writing were so difficult he was held back a year in school because he physically could not keep up. In spite of it all, he maintains a positive attitude and his “smile and attitude are as infectious as they are inspiring. Every milestone is cause for celebration.” This month he accomplished walking up the stairs with no hands. What was his motivation? He says, “So, I can carry milk up the stairs for mom and someday carry my own kids up the stairs.”

All the while, his dream of one day playing on the football field was about to come true. The team surprised him with a jersey and an offer to start the game as a quarterback in the football game against Logan High School on Friday, 11 October 2019. Proudly wearing number 82, Jonny Stott took to the field as the Wolves’ quarterback on the team’s first offensive play against Logan High School. He completed a pass to the left and the crowd went wild. It did not matter how short the pass was. What mattered most is how far Jonny had come. His mother, LaLoni Stott exclaimed, “It’s a dream! He’s our Superman!” Jonny said, “I just wanted to be out there even though I couldn’t play. Sometimes at night I just sit down and cry because I can’t play football. That’s been my dream—playing football for BYU and playing basketball for BYU, too.”

Prior to the game, Jonny Stott told a younger group of football players that his physical condition had helped to make him a “better person” than he would have become otherwise. He told them, “We all have struggles in our lives and my struggles have been my legs. Being on the sideline managing has been the hardest thing ever because I see people get hit and throw and I want to be out there hitting people.”

After completing the pass, Jonny’s teammates gave him high fives and hugs. He was glad the coaches, players, and faculty gave him the opportunity to play. He said, “It was so fun, you know, it was the best experience. It’s been my life dream to do it all.”

Jonny’s unforgettable experience is proof that sometimes football is more than just the four quarters of the game and the points scored. Sometimes the people who are playing the game is what is really important. The BYU player flag that storms the field every game bares Jonny’s autograph. Jonny’s picture is on the “Hero Wall” in the BYU football facility.

This past summer, Jonny decided to skip his junior year and took all his classes online so he could be a senior this year and graduate with his friends, stating, “I don’t want to wait to go on a mission.” Jonny also has an Eagle Scout award somewhere in his room, earned with zero accommodations.

Long thread of a BEAUTIFUL story.
PLEASE READ AND SHARE.

Senior Jonny Stott will be the starting QB in North Logan for Green Canyon High this weekend and it might be the greatest story in sports this year.
Jonny was born with a rare genetic mutation that left him paralyzed.