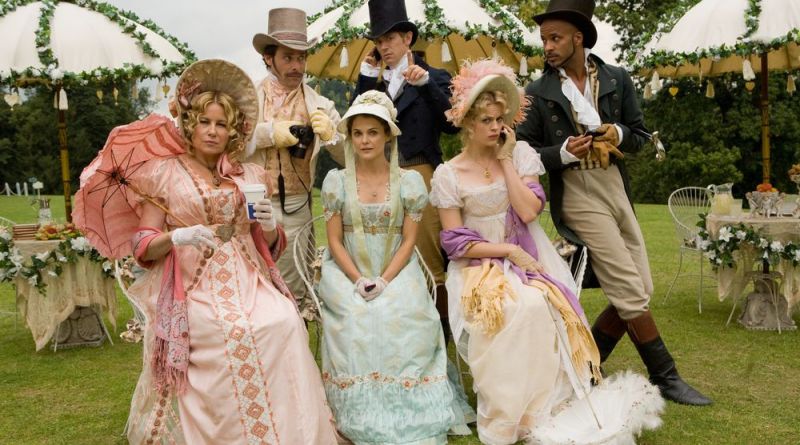 After showing at Sundance Film Festival in Utah, a bidding war began for Austenland, a movie based on the best-selling chick-lit book by the same name. The author is Shannon Hale, who is also known for fairy-tale style novels for children. Hale is a member of The Church of Jesus Christ of Latter-day Saints, whose members are often called Mormons. The movie was, as Stephanie Meyer put it, made by a bunch of Mormon women. Meyer, best known as the author of the Twilight series for teens, produced the movie and is also Mormon. The screenplay writer and director was yet another Mormon woman, Jerusha Hess, the writer for the Napoleon Dynamite moves.

It was Jerusha who started things off. She had read all of Hale’s children’s books back-to-back and told Hale she’d like to make a movie of any one of her books. Hale offered her Austenland, which she said she and Stephanie Meyer had dreamed of turning into a movie someday. Jerusha loved it and said she wanted to make this one into a movie. They clicked quickly and worked together on the movie script. Then they brought in Meyers, who was a friend of Shannon Hale’s and had mentioned in the past that the book would make a great movie. She offered suggestions on the script and a year and a half later, agreed to produce the movie. The three went off for a weekend to discuss the project in detail. They shared similar moral values and all three had children. They made it a policy to balance their creative work with their family lives. These shared values allowed them to work together very effectively.

The movie stars Keri Russell as Jane, a young woman who is obsessed with the world Jane Austen created. She spends all her money on a trip to a place in England that recreates the Austen world. The movie also features Jennifer Coolidge, Jane Seymour, JJ Feild and Bret McKenzie.

The film debuted at the prestigious Sundance Film Festival, playing to sold-out crowds. A bidding war launched for the picture, with Sony offering what is reported to be a more than four million dollar deal. The negotiations are said to have gone into Monday, an unusual situation because despite a large amount of money at stake, the three Mormon women refused to work or negotiate on Sunday. Mormons believe the Bible teaching to keep the Sabbath Day holy—all of it—still holds true today and so they discourage unnecessary Sunday work or unnecessary activity that causes others to work that day.

Stephanie Meyer attended the premiere of the movie as the producer and noted they were looking for a backer for the next Austenland movie, which would feature the staff at Austenland, but a different heroine, following the pattern of television programs like “Fantasy Island.”

In a press release, Sony said, “We love this movie. It announces the birth of a major filmmaker and Stephenie Meyer is truly a force of nature. We look forward to bringing Austenland to American audiences.”