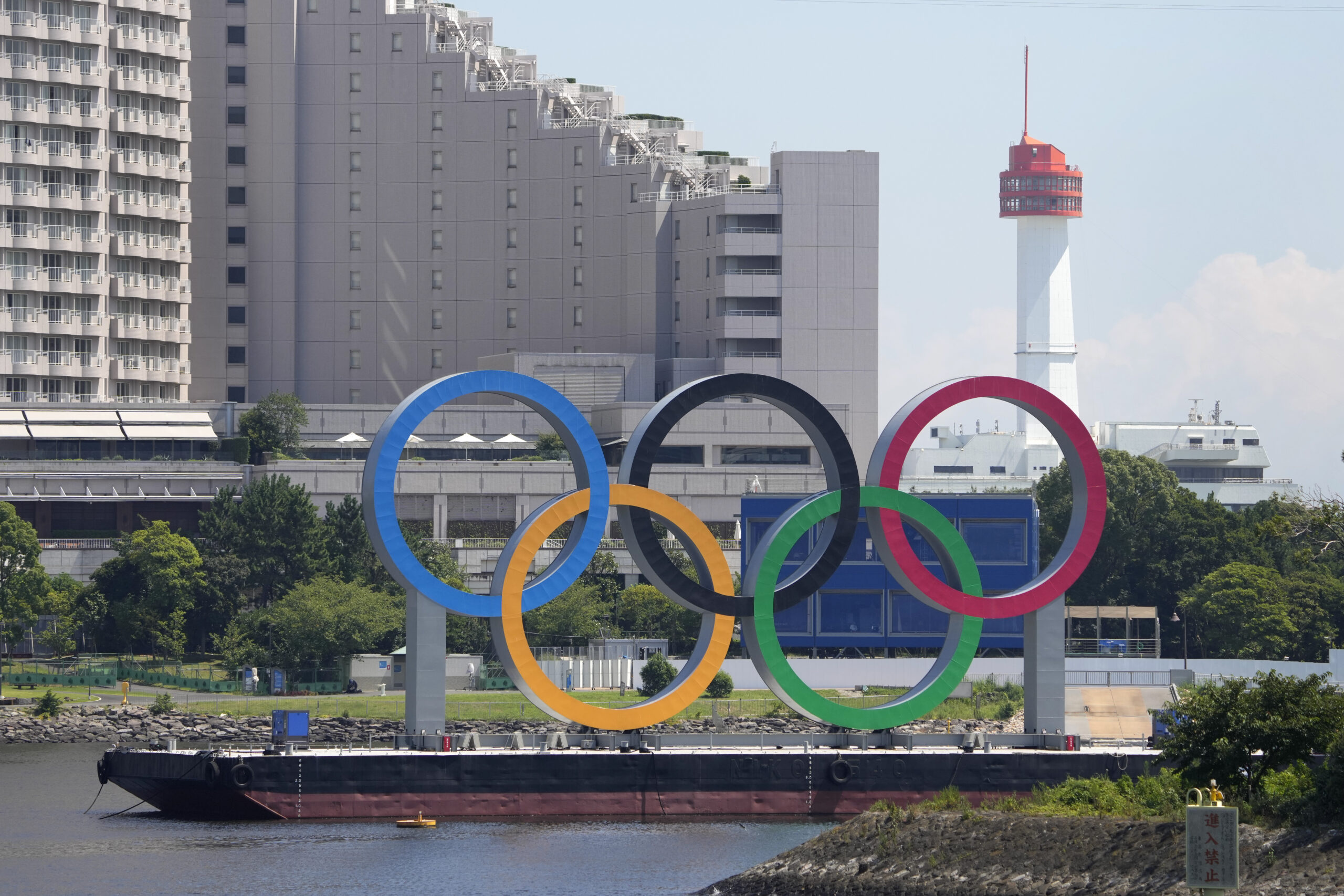 A year after a pandemic delay, the 2020 Tokyo Summer Olympic games are officially underway, with the opening ceremonies being held on Friday, 23 July 2021. The events run through Sunday, 8 August 2021.

Among the athletes competing on the world stage are 13 members of The Church of Jesus Christ of Latter-day Saints (often referred to as “the Mormon Church”). Those athletes are competing in a variety of sports, including soccer, pistol shooting, swimming, volleyball, beach volleyball, basketball, rugby, athletics, gymnastics, and weightlifting.

Here are a few highlights from the Olympic events. 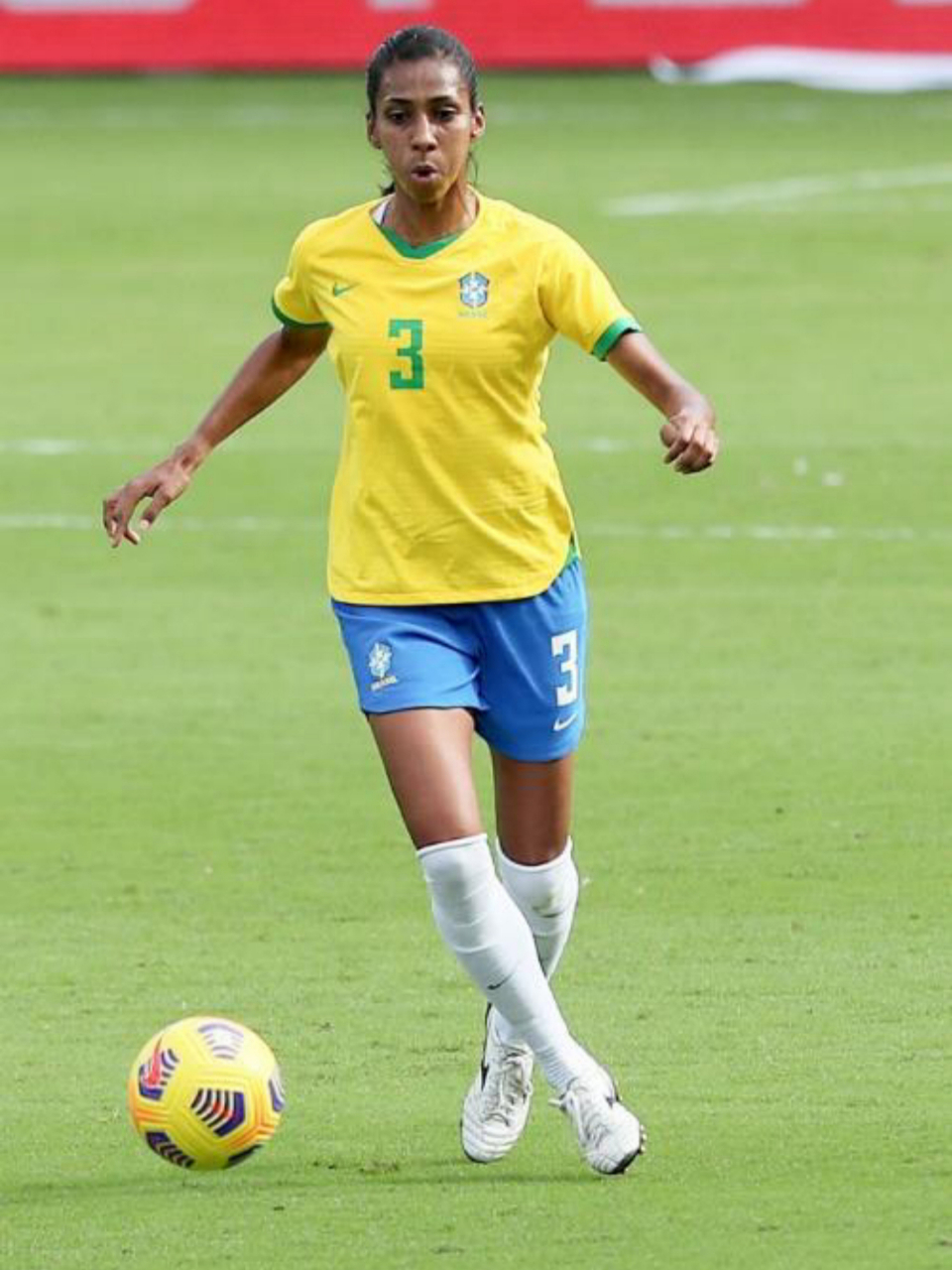 This is the third Olympics for 35-year-old professional soccer player, Bruna Benites. She was born in Cuiabá, Mato Grosso, Brazil. She plays for Sport Club Internacional, a top-tier women’s professional team in Porto Alegre, Brazil. She also holds a degree in physiotherapy from Dom Bosco Catholic University in Campo Grande, Mato Grosso do Sul.

At age 15, she was baptized a member of the Church with her family. Earlier this year she spoke at Roots Tech Connect and spoke about how she relies on the Lord for strength on and off the field. In a February 2021 interview with the Church News, she spoke about the important role that her family plays in her life. She said, “My family has always been my foundation. In my case, everything I did was for my family, how I felt about them. … I think family is the most important thing we have on Earth.” With frequent travel and most of the year spent away from home, she said, “my testimony keeps me strong when I am by myself. I know that I am not alone. I know that I have Heavenly Father with me. If it wasn’t for Him, I wouldn’t be where I am today.”

In 2012, Benites rose to fame at the London Olympics when she represented her country as Captain of the Brazillian National Women’s Soccer Team. In 2014, she helped win the CONMEBOL Copa América Femenina, which is the quadrennial international football competition for women’s national teams in South America affiliated with CONMEBOL. In 2016, the Brazilian National Women’s Soccer Team placed fourth in the Olympic Games in Rio de Janeiro, Brazil. In June 2019, Benites was hired by Sport Club Internacional and in December 2020, she won the Campeonato Gaúcho (officially named as Campeonato da Primeira Divisão de Futebol Profissional da FGF – Divisão Especial – Série A1), which is the topflight tier of the division of professional football clubs in the Brazilian state of Rio Grande do Sul.

The Brazillian National Women’s Soccer Team came in sixth overall. In an Instagram post Benites quoted Theodore Roosevelt as having said, “Nothing is impossible. If it can be dreamed of, then it can be done.” She also thanked her fans, saying, “Thank you for the affection, positive energy, and cheering.” She also quoted a scripture from the Bible found in 1 Thessalonians 5:18, “In every thing give thanks: for this is the will of God in Christ Jesus concerning you.” 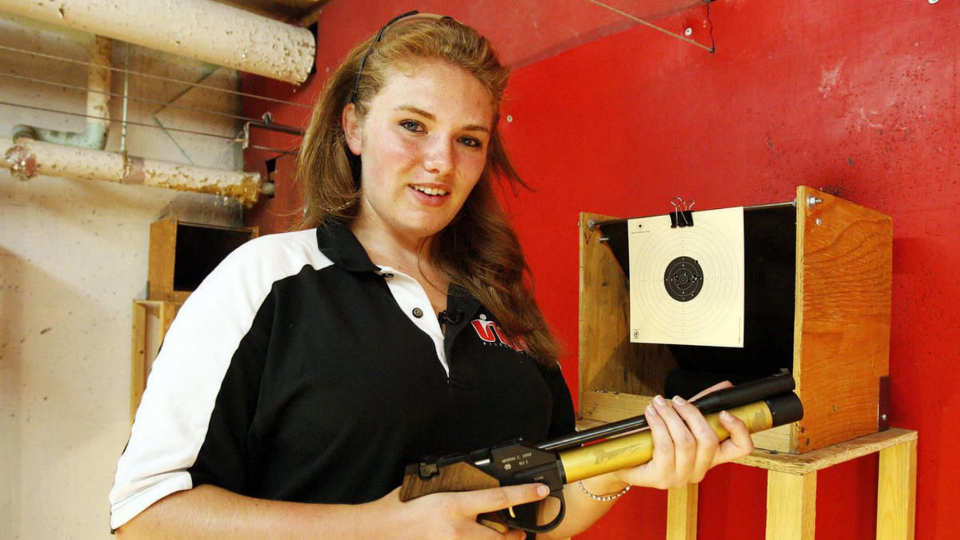 Nevada native, Alexis “Lexi” Lagan, a 28-year-old first-time Olympian, is competing for Team USA in women’s sport pistol, women’s air pistol, and in mixed air pistol events. She first began competitive shooting at age 10 when her father took her to a firearms class in Las Vegas, Nevada. She said, “My first competition was in a hunter safety class when I was 10. I had to have special permission to take it since the age group of the class was 12 to 18. I ended up beating all those boys. A couple of them went home crying because this ten-year-old girl in a pink jacket with rhinestones beat them.”

She wrote about her Olympic experience in an Instagram post. She said, “Thank you all so much for the love and support! This has been an incredible experience that I can hardly put words to. I’m so happy with what I have been able to accomplish and look forward to my upcoming competitions. With Paris only three years away, training for the next Olympics starts today, and I’m ready to get started!”

Alexis’ philosophy is, “Focus on the end goal. There will be a lot of unexpected obstacles, but those hiccups will just make your story more interesting when you accomplish your goal.” 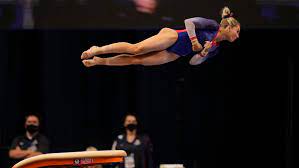 On Sunday, 1 August 2021, Mykayla Skinner, 24, was on the podium after the vault final, holding up her silver medal. Her teammates, including Simone Biles, whose withdrawal from the vault final allowed Skinner to compete. Biles, who is struggling with what gymnasts call the “twisties” (where they lose spatial awareness while performing), withdrew from the vault final on Saturday.

Skinner was fourth after the qualification round, but there’s a rule of two athletes per country moving on to the finals. She was after Biles and Jade Carey, who were first and second.

In the vault finals, each of the eight gymnasts do two different vaults and the scores are averaged together. Skinner earned 15.033 and 14.800 on her vaults, for an average of 14.916. 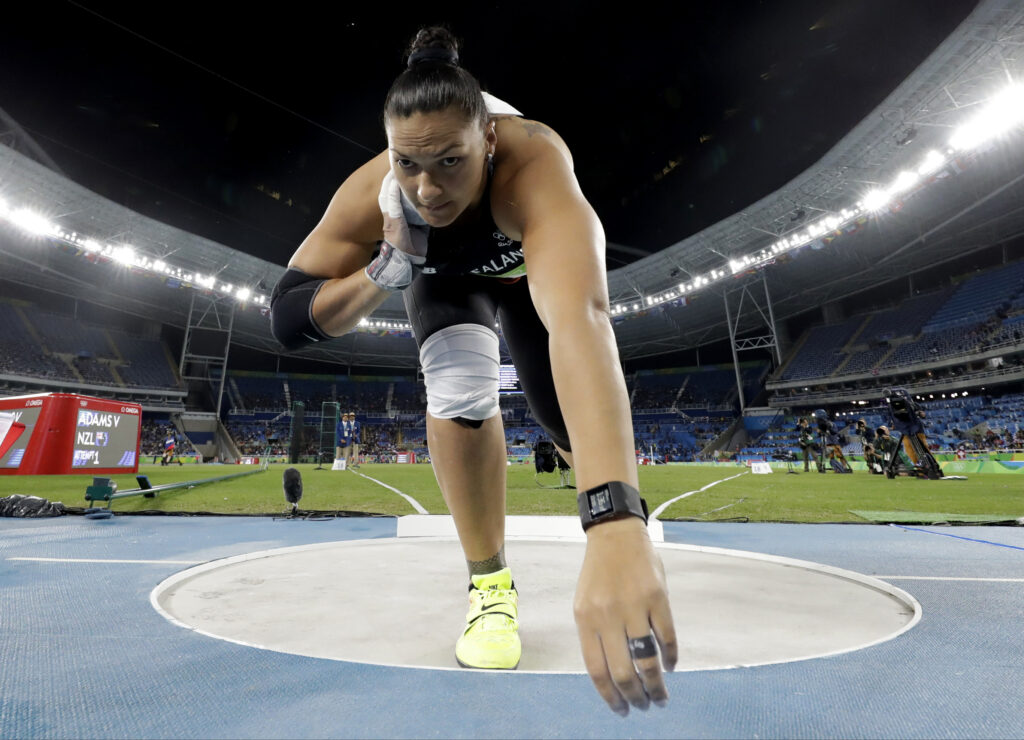 For 36-year-old New Zealand native and mother of two (son Kepaleli, 2, and daughter Kimoana, 3), Valerie Adams, Tokyo is her fifth Olympic Games. She first competed in Athens in 2004. The winner of a variety of medals in world and Diamond League competitions, Valerie took home gold medals in shot put in Beijing in 2008 and in London in 2012. In 2016, in Rio de Janeiro, she won silver. She is one of 18 siblings and is coaching a younger sibling, Lisa Adams, in the Paralympic Games.

She won the bronze medal with her best throw of 19.62 meters, about 21.46 yards. After qualifications, the top 12 compete in the finals. After three throws, the top eight do three more throws of the 4 kilogram or 8.8-pound metal ball. They keep the best throw of the six attempts. Her best throw was her third as each competitor chased the 20-meter mark.

At a press conference following the event, she said:

From the last Olympics in Rio to these Olympics I’ve had two children. This is my biggest inspiration. As a mum at the tender age of 36, it’s awesome to be competitive in my chosen event and be here and win a bronze medal, not only for me but for my country and for my children.

I really hope to make them proud, and I hope to continue to inspire female athletes that if they decide to have children, take the time off that they need to do so, because you can always come back and today, I’m a testament to that.

It just goes to show the strength of a woman. You can be a mom and come back and be an athlete as well. 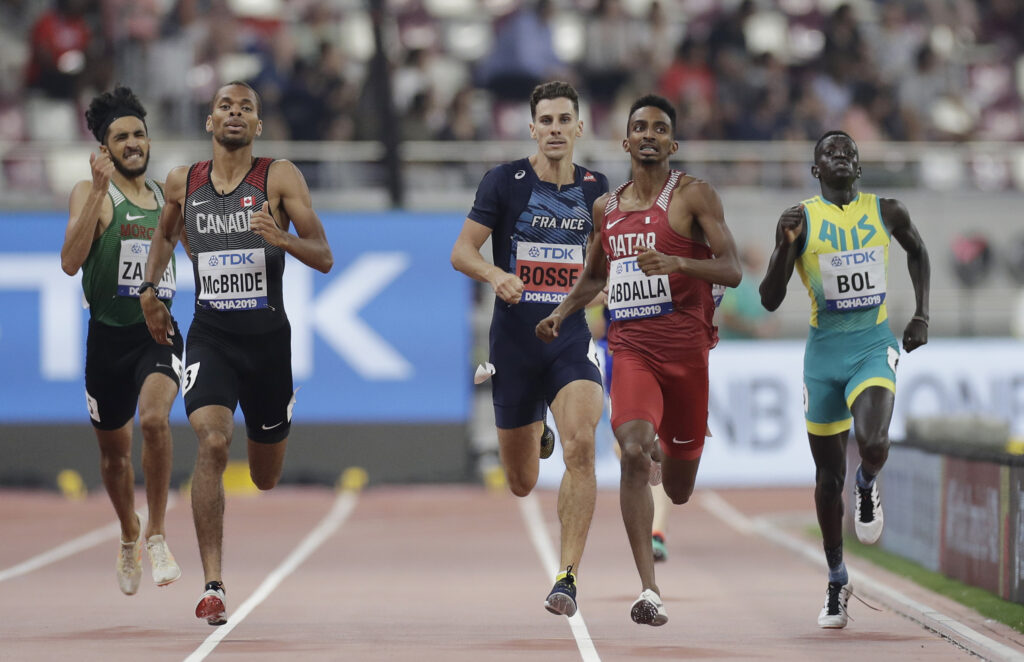 In the 2016 Olympics, 27-year-old Nagmeldin “Peter” Bol, competed in the 800-meter race. His family is originally from South Sudan, but they emigrated to Australia when he was a child. At first, Peter was interested in basketball, but at age 16, a teacher convinced him to try running. He won the Australian national championship in 2019.

Tokyo is Peter’s second Olympics. He won his semifinal heat in the 800-meter race, setting another Australian record and advancing him to the finals. The top two from each of the three semifinals plus the next two fastest runners move onto the finals, which will be held on Wednesday, 4 August 2021.

Peter’s time in the semifinals was 1:44.11, which was two hundredths of a second faster than his time in the qualifying heat of 1:44.13 the day before. His training partner, Joseph Deng, set the Australian record three years ago with a time of 1:44.21. 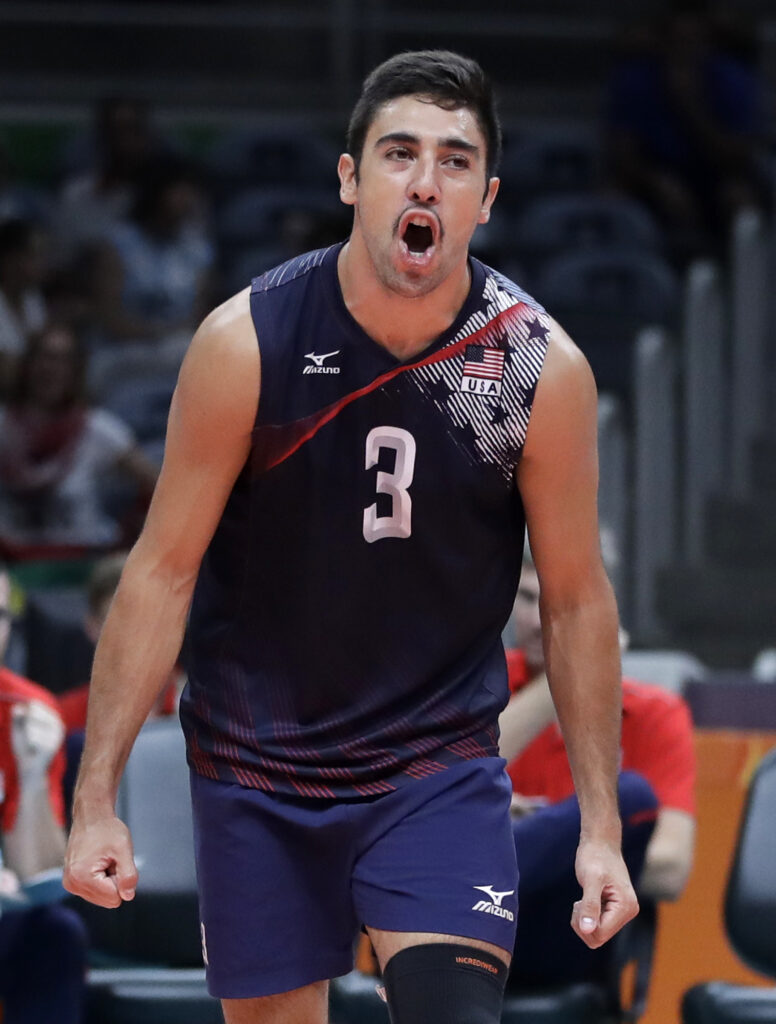 Taylor Sander, 29, from Corona, California, played college volleyball at Brigham Young University (BYU) where he earned all-America honors in each of his four years. He was also part of the USA’s bronze-winning team in 2016.

Brenden Sander, Taylor’s 25-year-old brother, and 27-year-old Ben Patch, of Layton, Utah, are alternates for the team at the Tokyo Olympics. All three attended BYU at different times between 2011 and 2018, and each has played professional volleyball following their time as Cougars.

Team USA, including outside hitter Taylor Sander, lost to Argentina 3-0 (25-21, 25-23 and 25-23) in the final game of preliminary round in Pool B. The top four teams in the pool advance to the quarterfinals. Team USA was 2-3 in Pool B, coming in fifth, and not advancing to the quarterfinals. 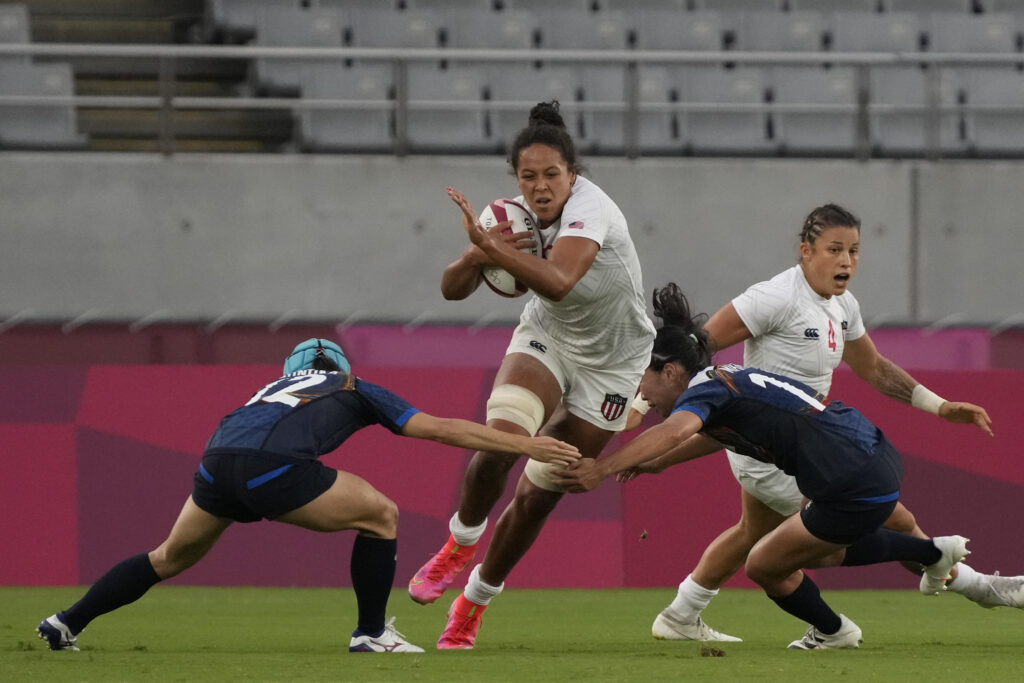 Jordan Matyas, of Team USA’s rugby sevens team, reflected on her first Olympic experience and her team’s sixth place finish. In an Instagram post, she wrote, “Winning doesn’t define you as a person. . .. Everyone deserves to win, but not everyone can, that’s the beauty of the sport. Everyone has made sacrifices to win, and regardless of the result it’s all worth it just for a chance at winning. Although it’s not my time to be a winner on the pitch we are all winning in some other way. I’m proud to be a part of something greater than myself.”

For more news about the Latter-day Saint athletes who participated in the Tokyo 2020 Summer Olympic Games, please read the article “Latter-day Saints in Olympics, day 10: Bronze in weightlifting, plus updates in basketball and beach volleyball.”